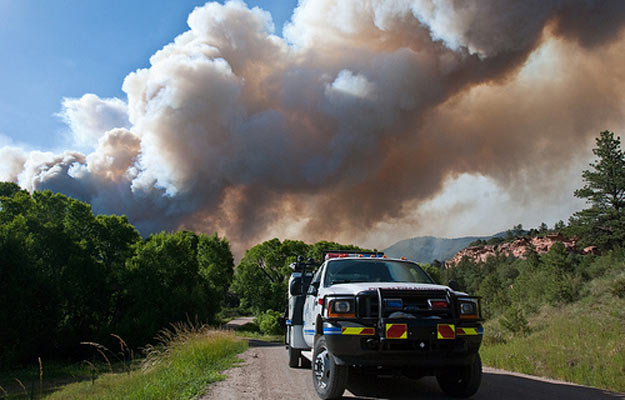 Where there’s smoke, there’s fire…and a lot of hot air. The National Guard/FlickrIn the wake of the behemothic Colorado Waldo Canyon wildfire that has razed hundreds of homes, blighted thousands of acres, and forced more than 35,000 people to flee for their lives, the Colorado-Springs-based evangelical group Focus on the Family thoughtfully reminds us a savage inferno isn’t the only thing ragin’ in these woods. (via Right Wing Watch)

In a blog post titled “Dig Deeper: Same Wisdom Applied to Sexual Risk Avoidance as Wildfire,” published Wednesday on CitizenLink, the news and political arm of Focus on the Family, abstinence education analyst Chad Hills breaks it down. (My comments are in bold.)

Today, in the state of Colorado, we are breathing smoke from a number of wildfires burning out of control. As of this morning, near Focus on the Family, it’s being reported that 15,000 acres have been consumed by fire and some 34,000 people evacuated by the Waldo Canyon fire. More to come, I’m sure.

Huge plumes of smoke and fire are billowing upward from our pine-covered mountains, as whimsical winds drive the fires on dangerously unpredictable paths. All the while, exhausted firefighters and police work feverishly to close roads and evacuate homes that could be overtaken. Check out a couple of photos showing the devastation, below:

Questions begin to fester in our heads: So many fires have started in such close, uncanny sequence in Colorado, with Waldo Canyon being more recent…Would any sane person intentionally start a series of fires (arson) that would destroy other people’s lives? Could someone be so reckless or careless as to start a campfire, disregarding the extremely dry conditions, risks and a state-wide fire ban that is in effect? Or could it be nature, such as lightning, absent of rain?

Wouldn’t we all agree that it’s better to prevent a forest fire, if and when possible, than treat the immense damage in its aftermath?

These questions are similar to what the National Abstinence Education Association (NAEA) is asking Congress and state legislatures about our nation’s approach toward pre-marital sex…Certain questions arise: Why aren’t our schools, our states and our nation placing a clear and unquestionable priority on sexual risk avoidance (SRA)?

Why are we intentionally spending billions of dollars handing kids matches (condoms), which result in careless (sexual) “fires” and treating victims who have been unnecessarily burned by sex (STDs, pregnancy)? Wouldn’t prevention be cheaper and healthier?

“Safe” sex education—or promoting casual sex, while handing out condoms and birth control to kids—is analogous to passing out matches to kids in school, and telling them, “Be sure you play safely with these in the forest and, above all, have fun!”

It’s irresponsible messaging that encourages high-risk behavior at a great cost to families and our entire nation.

Yet our federal government currently pours nearly 16 times as much money into “safe” sex education than it does into helping kids learn how to avoid starting fires in the area of sexuality or SRA. Perhaps this is why we have so many uncontained “fires” caused by sex outside of marriage.

What can we learn?

Sadly, impressionable minds will continue to fester with…questions because CitizenLink has scrubbed Mr. Hills’ lucid wisdom from the annals of the interwebs. Here’s a screen shot of his original post. 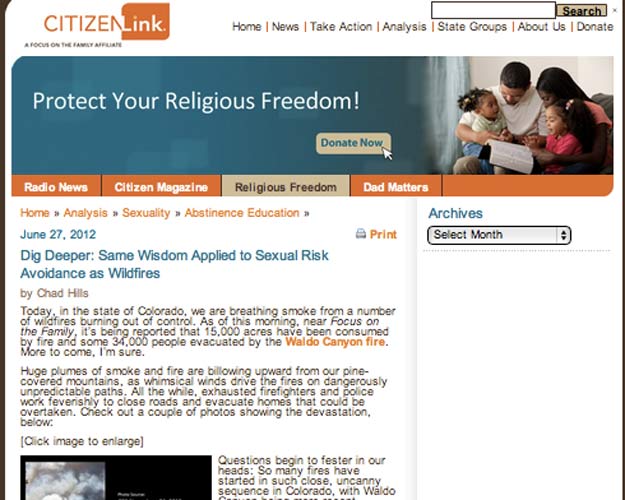