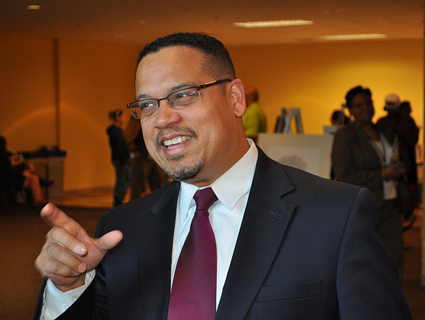 Since being sworn in—on Thomas Jefferson’s Koran, no less—as the country’s first Muslim congressman five years ago, Minnesota Democrat Keith Ellison has been a magnet for conservative criticism. Florida Rep. Allen West told an interviewer in 2011 that Ellison, because his faith undermines America’s Judeo-Christian foundation, represents “the antithesis of the principles upon which this country was established.” Just last week, his Minnesota colleague Michele Bachmann accused Ellison of supporting the Muslim Brotherhood.

Now, the Republican nominee to take Ellison on in November has gotten in on the action. On Tuesday, Chris Fields, a Marine Corps veteran with no prior political experience, sent out a fundraising appeal asking for help defeating his “militantly anti-America” opponent”:

While I was fighting on a battlefield in Iraq, my opponent was doing everything he could to cut funding for the war and the soldiers fighting it.

Keith Ellison is militantly anti-America. He attacked the Pledge of Allegiance, voted countless times to throw our troops serving in harm’s way to the wolves and teamed up with Barney Frank to destroy the banking industry. Not surprisingly, he’s the proud co-chairman of the radical Congressional Progressive Caucus.

(Emphasis his). Fields doesn’t stand a chance against Ellison; Democrats hold a 22-point edge in the distict and Cook Political Report rates the seat a “solid D.” But he’s still the representative of the state GOP in this race, and was endorsed by the party convention.

On the other hand, it could have been worse. Fields won his party’s nomination by beating Lynne Torgerson, who was running to expose Ellison’s plot to spread Islamic Shariah law. Torgerson blamed Fields’ victory on a plot by Ron Paul activists to take over the state, citing as evidence my 2011 magazine piece on the New Hampshire Free State Project. As Shep Smith said, politics is weird.