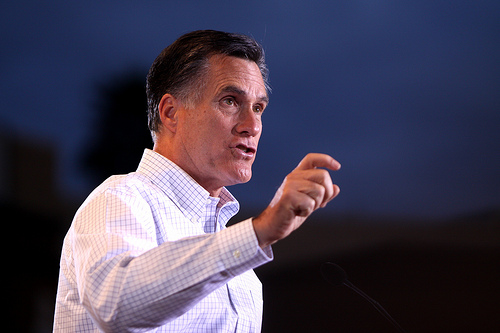 David Koch, one-half of the brotherly duo that controls the Koch Industries conglomerate, played host to one of the three fundraisers this weekend in the Hamptons (a summer enclave for rich people near the eastern tip of Long Island) benefitting presumptive GOP presidential candidate Mitt Romney. According to the New York Times, Koch told attendees “he was committed to ousting President Obama, citing the evening’s fundraiser and his own efforts to raise campaign money this year.” Ted Conklin, owner of the posh American Hotel in Sag Harbor, told the Times as he idled in his gold Mercedes on the way to a Romney fundraiser: “Obama is a socialist. His idea is find a problem that doesn’t exist and get government to intervene.” You can bet that this kind of Obama hatred was on full display at all three of Romney’s Hamptons fundraisers, which together netted the candidate more than $3 million.

That sum isn’t included in Romney and the Republican National Committee’s breathtaking $106 million haul for June. But there’s a simple enough explanation for why Romney is raising so damn much money: Barack Obama. When it comes to reeling in campaign cash, the president surpasses any of Romney’s fundraisers. Just as Democrats banked hundreds of millions in 2004 by invoking George W. Bush and his policies, in 2012 Obama and his policies are the reason Romney, the RNC, and Republican super-PACs and nonprofits are swimming in money. “You can walk into certain rooms and say, ‘We’ve got to get rid of Obama,’ and out come the big checks,” says Anthony Corrado, a political scientist at Colby College.

Here’s some context for Romney and the GOP’s $106-million month. It’s $58 million more than GOP presidential hopeful John McCain and the RNC raised in June 2008. It’s $35 million more than the Obama campaign and the Democratic National Committee raised in June. And it’s the second month in a row that Romney and the Republicans outraised Obama and the Democrats. (In May, Romney raised $77 million to Obama’s $60 million.) To borrow from Vice President Joe Biden, Romney’s June numbers are a big fucking deal.

The Obama campaign wasted no time Monday underscoring this fact. In an email to supporters titled “We could lose if this continues,” Ann Marie Habershaw, Obama for America’s chief operating officer, wrote, “This is no joke. If we can’t keep the money race close, it becomes that much harder to win in November.”

A few weeks ago, Obama told supporters that he could be the first president in modern history to be outraised by his challenger. That possibility alone will nudge some Democratic donors off the sidelines. For all their quibbles with Obama, these individuals will open their checkbooks if it helps prevent a Romney presidency. The question is: Will Democratic donors large and small pony up enough to counter the white-hot Obama anger among Republicans and conservatives?