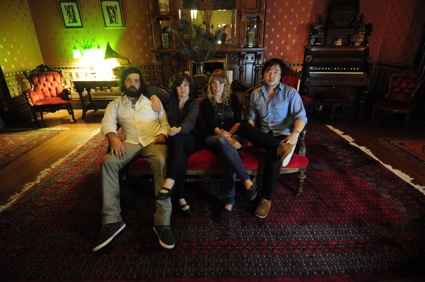 The city that spawned the original psych-rock scene is at it again with a burgeoning group of bands and artists playing psych-pop, weird rock, and all manner of arty, eccentric takes on classic song structures and themes. Tim Cohen is one of the mainstays of this new scene: In addition to playing with the Fresh & Onlys, he started Magic Trick, initially a solo project in his apartment studio that gradually expanded to include San Francisco musicians James Kim, Alicia Vanden Heuvel, and Noelle Cahill. The band’s new album, Ruler of the Night, is its second full-fledged effort after a couple of Cohen-only records.

As magic tricks go, this is a sleight of hand rather than a grand illusion—that is, one that enchants and delights in small, subtle ways, but only occasionally gives cause for outright marvel. The album is anchored by Cohen’s deep, resonant voice, often distant and washed in reverb, while tambourines, washboards, and multi-part harmonies take songs in unexpected directions. Sometimes the experimentation doesn’t quite work—the quiet, twanging song “Next to Nothing,” for example, is sprinkled with a distractingly obtrusive sound effect—but usually it adds a welcome note of the uncanny to catchy but otherwise straightforward pop-folk tunes.

Indeed, songs don’t stand out on this album so much as moments do: the warbling, whistling refrain of “Angel Dust,” the soaring synths and chorus of hoots fading in and out of the background throughout “Ruby,” the rousing chorus of “Invisible at Midnight,” the melodiously twinkling intro to “Torture,” the poppy sweetness of “Sunny.” The eponymous track is an exception: Cohen sings over a lulling background of tambourine and muffled guitar in an eerie tune that’s at times oddly reminiscent of something out of Phantom of the Opera. But Magic Trick doesn’t seem to be aiming for hits so much as trying out different sounds and combinations in search of moments of surprise, discovery, and recognition. “Melodies,” Cohen sings, “don’t last too long / but nothing lasts forever.”

It’s hard to imagine a better setting for a Magic Trick show than the Golden Gate Park’s space-age-inspired California Academy of Sciences, on a stage flanked by a planetarium and a giant jungle terrarium, underneath a glass dome through which the fog drifting across the city was plainly visible. That the power went out briefly at the beginning of the night only added to an aesthetic that matched the band’s lushly atmospheric, overtly weird, often interrupted sound.