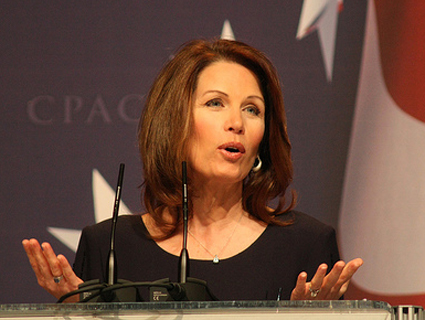 For years, a segment of the conservative movement has trumpeted the conspiracy theory that Muslim radicals have infiltrated the US government. Although the right’s anti-Muslim voices were marginalized during the Bush administration, their ideas moved into the mainstream when Barack Obama took office, as crank theories about the president’s faith and alleged “Muslim sympathies” gained traction.

Frank Gaffney, a Reagan-era Pentagon official who now runs a group called the Center for Security Policy, is one of the main originators of the baseless conspiracy theory that American Muslims are secretly plotting to replace the Constitution with Taliban-style Islamic law. (He also called Obama America’s “first Muslim president” and sees Muslim Brotherhood conspiracies in government agency logos.) Now Rep. Michele Bachmann is alleging that one of Secretary of State Hillary Clinton’s close aides, Huma Abedin, is a secret agent for the Muslim Brotherhood—and there’s a Gaffney connection there, too. As Eli Lake noted the New Republic in July of last year, Gaffney was once an adviser to Bachmann’s presidential campaign.

As Salon‘s Alex Seitz-Wald points out, you have to go to absurd lengths to tie Abedin to the Brotherhood:

The mainstreaming of this sort of anti-Muslim quackery is having actual real world consequences abroad. As the New York Times Robert Mackey reports, some Egyptians, spurred on in part by Egyptian pundit Tawfik Okasha (dubbed Egypt’s Glenn Beck) have now bought into the notion, repeated endlessly on conservative blogs, that the Obama administration is covertly supporting the Muslim Brotherhood and helped engineer its success in Egypt. (How the Obama team was unable to repeat such flawless manipulation of domestic politics in Libya, where the Brotherhood’s local affiliate was defeated, is anyone’s guess).

It’s tempting sometimes to dismiss the right’s conspiracy theorizing about Muslims as laughable (Shariah turkeys, ect), just because it’s so far-fetched. But as with the so-called “Ground Zero Mosque,” the rash of unconstitutional “anti-Sharia” laws being proposed across the country, and the general formenting of suspicion and fear of Muslims throughout the country, this stuff has real consequences. From a national security perspective, it makes actual radicalism harder to identify, making it harder to see genuine threats when they emerge.