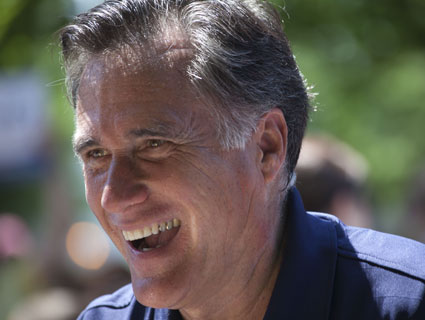 “I’m not going out to protest Mitt Romney,” Justin Wedes, an Occupy Wall Street organizer, announced over the bus PA system on Sunday en route to Southampton, New York, where Romney was holding a fundraiser at the beachfront estate of billionaire industrialist David Koch. Wedes and two busloads worth of activists had set out to protest a corrupted “system,” not any particular candidate, he reminded his fellow passengers as we rolled along the Long Island Expressway.

Occupy organizers had joined with traditional progressive organizations to make the logistics work. The American Federation of Teachers, a large union that typically endorses Democrats, underwrote the bus trip from Union Square and back, according to Aaron Black, another Occupy organizer. Greenpeace and MoveOn.org cosponsored the event.

After the busses arrived in Southampton, where the Hamptons Hedges are trimmed impeccably and lawns must be mowed at least weekly, per town ordinance, protesters assembled along a roadway within eyeshot of the ocean. At a Cooper Beach restaurant specializing in overpriced fried foods, cashier Patty Fanning mused about the protest. “My family has been here since the Civil War, and I’m the first generation to not be able to afford to live here,” she said. “It’s a disgrace.” Fanning would have marched alongside the protesters if not for her shift, she said, ringing up a $2.99 bagel.

A group of young women working at the Cooper Beach parking lot information booth chatted about the protesters as they checked vehicles for beach permits, which cost $40 per day. Ali Wilson, the daughter of a local police chief, said that locals had a generally favorable view of David Koch and family. A friend of hers babysits for their two children at a rate of $20 per hour. That’s “pretty normal for babysitting,” she said.

After some initial confusion near Cooper Beach, Southampton police permitted protesters to march on the street to their next destination—the entrance to the Koch compound. From there, activists shouted “for shame!” at luxury vehicles entering the property.

Reporters and photographers lined up to visit the sole counterprotester—Jim Wilson, the Romney superfan who travels the country in a pickup truck garishly adorned with campaign insignia. “Give them proportionate attention, will ya?” Wilson told a photographer snapping shots of his vehicle. Last month, Wilson’s truck exploded, and the Romney campaign purchased him a new one. “Wait till they get to know Mitt and Ann up close,” Wilson said. “He’s one hell of an ordinary guy.”

With a pipe dangling from his mouth, Wilson asserted that protesters were “getting paid” to show up and agitate. When pressed for evidence of this, he said “check any website.” Then he went back to talking about the Romneys. “They will fall in love with that couple. They are just upstanding citizens. You know, the peculiar thing—he dresses very well, he wears a suit well. It’s almost as if he’s from Central Casting!”

Though a few protesters said they were strong supporters of Obama, there was little sign of the overtly partisan overtones that Justin Wedes had warned against. Chuck Perretti, from nearby Setauket, New York, said he volunteered extensively for Obama four years ago, but had since become disillusioned. “I thought he was going to stand up for the middle class,” Perretti sighed. “But he was thwarted—by an uncreative way of thinking.” Susan Van Olst, a Southampton native who wore an Obama-Biden pin, took a slightly different view. “It’s not Obama’s fault that he’s caught up in the system,” she said. “The system is broken.”

Organizers eventually declared that a contingent of protesters would “take the beach,” i.e., march a sandy half-mile to the oceanfront portion of Koch’s sprawling estate. Some occupiers who had remembered their bathing suits took quick dips along the way—at 67 degrees, the water was inviting. Security personnel perched atop the dunes at the rear of Koch’s property filmed protesters with their iPads. A Secret Service agent shooed away two reporters who attempted to catch a glimpse of the estate’s backyard. Some swankily dressed men, presumably fundraiser attendees, meandered out and snickered at the scene on the beach.

“David, come out! We got some shit to talk about!” protesters chanted, as a Coast Guard vessel watched on from the sea. David Intrator, the saxophonist who has long been a fixture at Occupy events in New York, belted an impassioned rendition of “The Star-Spangled Banner.” Protesters sang along, and one or two officers appeared to crack a brief smile.