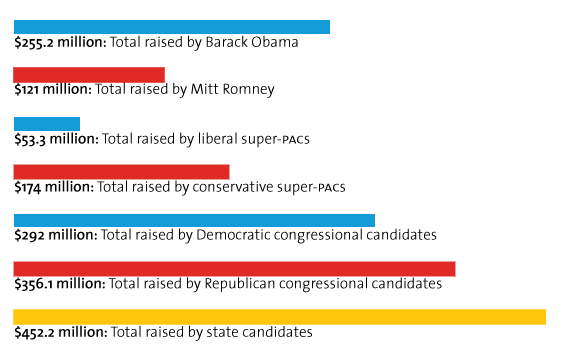 “If we had a Karl Rove of our own out there, we wouldn’t have had to do this.”
—An Obama campaign official speaking to the New York Times‘ Robert Draper, expressing frustration that the campaign had to buy TV airtime to respond to an attack ad from Karl Rove’s American Crossroads super-PAC. But as a Crossroads spokesman told Draper, “Outside money tends to flow toward the party out of power, and to causes to stop things rather than to promote things.”

$7.2 million: The amount pro-Mitt Romney super-PAC Restore Our Future says it plans to spend on ads in 11 swing states during the summer Olympics. The campaign gives Restore Our Future the opportunity to praise Romney for his role in managing the 2002 Winter Olympics in Salt Lake City. The ad buy also would outpace the $6.5 million that the Obama campaign is planning during the games.

While super-PACs get a lot of attention, campaign fundraising is outpacing that of the primary super-PACs supporting President Obama and Mitt Romney. The Center for Responsive Politics breaks down various kinds of money supporting the presidential campaigns. 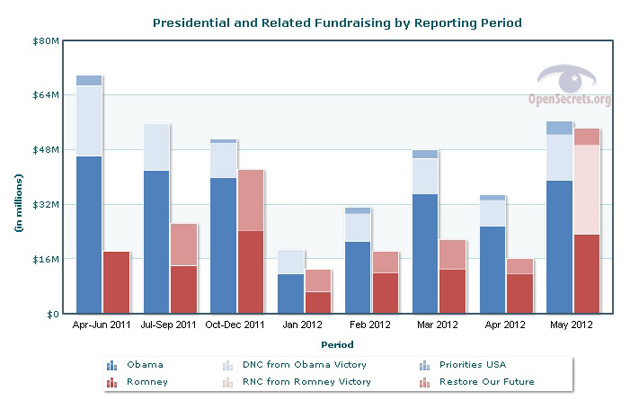 • Is Rick Santorum’s New Dark-Money Group Breaking the Law?: Patriot Voices says its “first priority” is defeating Obama. Tax experts say that could land Santorum in hot water with the IRS.
• America’s Most Patriotic Super-PACs: In honor of the Fourth of July, a salute to seven groups that vaguely embody what makes us great.
• An Interactive Map of the Dark-Money Universe: Have you checked out our guide to 2Red giants, blue dwarfs, and cash-sucking black holes?