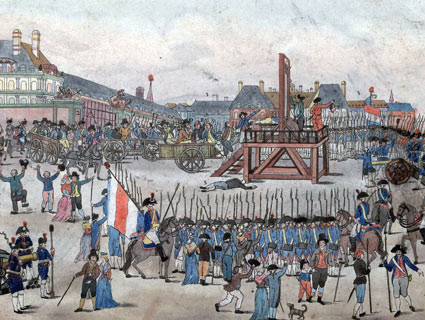 Heads will roll...to the beat of these awesome tunes!Anonymous/Wikipedia Commons

In the summer of 1789, France was embroiled in political and social bedlam. Decades of built-up bitterness and desperation roused by meager harvests, soaring bread prices, oppressive taxes, and a government that had frittered away its royal coffers erupted on July 14: A mob stormed and captured the Bastille garrison in Paris, igniting a decade of revolutionary discord. Blood spilled by the buckets. Heads were piked like saucy meatballs on a platter. An absolute monarch was exchanged for an emperor. Marie Antoinette didn’t say anything about cake.

Now, 223 years later, French nationals and Francophiles alike celebrate Bastille Day, formally La Fête Nationale, and maybe you should, too, since, for far too long, France has gotten an undeservedly bad rap. So to commemorate—okay, a couple of days late—the occasion that created modern-day France, which took up arms on our behalf against the yoke of the British monarchy, conceived 246 varieties of cheese, and made everyone’s first kiss entirely too slimy, here’s a roundup of music from notre amie across the sea. With tracks spanning three-quarters of a century and half a dozen genres, this Francophone playlist has a little something for everyone. Give it a listen and later, you can casually tell your friends over café au lait about your cosmopolitan iTunes library and affectation for la chanson francaise. (I promise you won’t look like a tool!)

2. Edith Piaf, “La Vie en Rose”: Arguably the greatest French love song from the country’s most iconic singer. Listen to it—and try to resist the urge to twirl in a flowy skirt (or sans-culottes!)—beneath a moonlit sky with a cigarette in one hand and baguette in the other.

3. Charles Aznavour, “Il Faut Savoir: Although the “French Frank Sinatra” is better known in the states for American rom-com fare like “She,” his mellifluous French ballads are equally as touching and tear-inducing for those Friday nights when you’re folding laundry and eating Ramen over the kitchen sink—alone.

4. Serge Gainsbourg with France Gall, “Les Sucettes”: This song is about “lollipops.” No, this kind. (It’s what the French call “double entendre.”)

5. Oberkampf, “La Marseillaise”: The anarchist fervor of the revolution was resurrected in France’s punk scene. Here, Oberkampf pays its disrespect with this fierce rendition of the country’s national anthem.

6. Air, “Sexy Boy”: The electronic duo from Versailles specializes in imaginative and ethereal synthesized pop. While the lyrics are sparse, the symphonic sound is intoxicating.

9. Carla Bruni, “Quelqu’un M’a Dit”: Yes, the former first lady of France is powerful, beautiful, rich, and talented. Guess some women really can have it all.

10. Yelle, “Je Veux Te Voir”: Yelle singer Julie Budet rose to Internet stardom when she released this single on her MySpace. (Remember that, kiddos?) Now she and her bandmates are touring the globe with their bubbly brand of electropop.