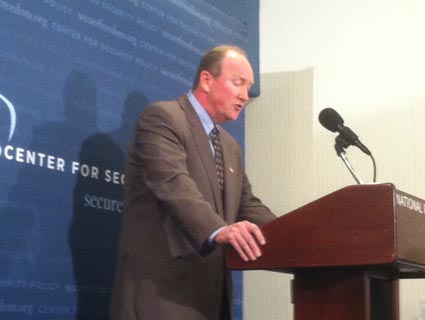 So with their support crumbling, the Shariah-panic caucus brought out one of their big guns to defend Bachmann’s crusade. Andrew C. McCarthy, a National Review columnist and former federal terrorism prosecutor, headlined a Center for Security Policy event in Washington on Wednesday in which he accused the Obama administration of Islamist sympathies. “There is something terribly wrong if members of Congress were not asking questions about Islamist influence in our government,” McCarthy told the largely sympathetic audience at the National Press Club. “Islamophobia is a term that was manufactured by the Muslim Brotherhood precisely for the purpose of browbeating people into silence about the activities and threat posed by Islamic supremacism.”

This isn’t the first time McCarthy has used the credibility he’s earned as a former prosecutor to lend legitimacy to nutty accusations. In September of 2009, McCarthy alleged that “terrorist sympathizers” had “assumed positions throughout the Obama administration.” By “terrorist sympathizers,” McCarthy meant Obama administration lawyers who had represented Gitmo detainees or challenged Bush-era war on terror policies the Supreme Court ruled unconstitutional. Many of these lawyers went on to defend policies like targeted killing and indefinite detention, but to McCarthy, they were all foot soldiers in a “Grand Jihad,”—the title of a book in which he argues that the Muslim Brotherhood and the American left have teamed up to destroy America. “What do health care reform and ‘the Grand Jihad’ have in common?” National Review‘s Kathryn Jean-Lopez asked McCarthy in a 2010 interview. “They both enjoy support of Islam and the left,” McCarthy replied. “In this context, by ‘Islam,’ I mean the Islamist movement.” Great Islamists in history: Hassan al-Banna, Sayyid Qutb, and Ted Kennedy.

McCarthy seemed eager to disassociate himself from his questionable allies and theories at Wednesday’s event. When Faith in Public Life blogger Nick Sementelli asked McCarthy whether he agreed with his benefactor, Center for Security Policy head Frank Gaffney, that Obama “might still be a Muslim” and was not born in the United States, McCarthy demurred, calling birtherism “nutty” instead of repeating the strident defenses of birthers that appear in his National Review writings. Sadly, Sementelli didn’t ask about whether McCarthy still thinks former Weather Underground member William Ayers wrote Obama’s autobiography. (Here’s a link to a C-Span video of the event.)

Among the most awkward moments of the press event, however, was when I brought up McCarthy’s suggestion that Obama would base his decisions about whether to attack Al Qaeda in part on whether the Muslim Brotherhood might still have “use” for Osama bin Laden and his terrorist group. In 2010, McCarthy told Lopez that “the Brotherhood and the Saudis will sing no sad songs if the US kills bin Laden or crushes Al Qaeda,” and that “Obama knows the Islamists he wants to engage have decided Al Qaeda is expendable. He won’t lose any ground with them by smashing Al Qaeda.” I confronted McCarthy about this statement on Wednesday, and seeking to make his accusations against Abedin credible, he all but denied he said it. The Washington Post‘s Dana Milbank was there, too, and in a column Thursday he summarized the relatively thin gruel McCarthy served up. Here’s Milbank describing McCarthy’s response to my question:

The prosecutor’s case was crumbling. Moments later, he likened Egypt’s new government to Hitler’s Germany. He had difficulty when Mother Jones reporter Adam Serwer challenged him to explain how Obama was advancing sharia at the same time he was supporting same-sex marriage. Serwer also asked McCarthy about his 2010 suggestion that Obama was free to kill Osama bin Laden because “the Islamists [Obama] wants to engage have decided al-Qaeda is expendable” and counter to their peaceful takeover of American institutions.

If he says so.

As for the same-sex marriage thing, McCarthy responded, “To say that Obama has Islamist sympathies, is not the same as saying he’s an Islamist, or that he wants to impose Shariah…There are many historical instances of leftists and Islamists working together.” Let’s assume this sounds sensible instead of dumb (Apparently Obama is an “Islamist sympathizer,” but that doesn’t mean he actually sympathizes with the Islamist cause. It’s just that they share similar goals, like universal health care coverage). This is the cover of one of McCarthy’s latest books: 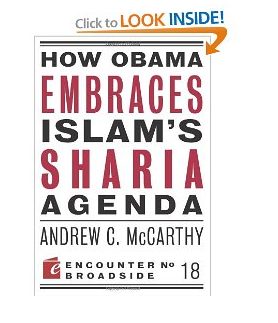 Maybe the “Shariah Agenda” is two dudes getting married in a mosque?