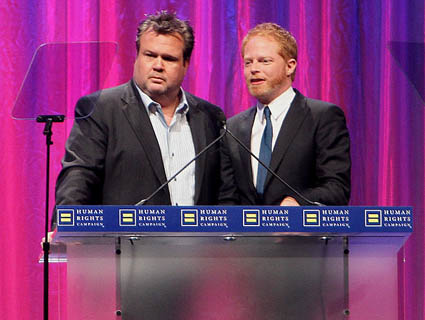 Would-be First Lady Ann Romney’s favorite television show is ABC’s Modern Family, a relatively tame sitcom that features three related couples raising children. One of these couples, Cameron and Mitchell, happens to be a cohabitating same-sex couple with an adopted daughter. The Republican Platform for 2012 calls for a constitutional amendment that, in the real world, would forbid the government from legally recognizing relationships like the one Cameron and Mitchell have.

The irony was not lost on the show’s co-creator, Steven Levitan, who offered Mrs. Romney a role on the show. “We’ll offer her the role of officiate at Mitch & Cam’s wedding. As soon as it’s legal,” he wrote on Twitter. Naturally, if Mrs. Romney’s husband has his way, this will never happen. Mitt Romney is not merely opposed to same-sex marriage, but legal recognition of same-sex couples of any kind.

Ann Romney however, is not alone in her fondness for the show. A 2010 survey found that Modern Family ranks as Republicans’ third favorite show on television.

This might seem strange, were it not for the fact that the great irony of Modern Family is that its view of “family” is tremendously conservative and traditional. There are three couples on the show: The aforementioned Mitchell and Cameron, Mitchell’s sister Claire and her husband Phil, and Claire and Mitchell’s father Jay and his second wife Gloria. Each of these couples features a (male) breadwinner and a stay-at-home parent whose primary responsibility is to the children. Despite their superficial differences—the noticable age and aesthetic differences between Jay (Married with Children‘s Ed O’Neill) and Gloria (Sofia Vergara), the fact that Mitchell and Cameron are men—the vision of family on the show is one that hews very closely to what conservatives like to call the “traditional family.” The show has also been very restrained in its portrayal of Mitchell and Cameron’s relationship—they did not so much as kiss until the second season. The show’s subject matter is also pretty vanilla—couples’ weird foibles, kids do the darndest things and so forth—with the few bawdy jokes usually being too complicated for anyone who isn’t an adult to pick up on.

Modern Family‘s traditionalism probably has much to do with why conservatives, including Ann Romney, like the show so much. It portrays a future in which the “modern family” exists within comforting, familiar framework.  The show is subversive in its conservatism, in its ability to make Republicans see themselves in a family arrangement that, to this day, they remain steadfastly opposed. Eventually, these Republicans will come to recognize the contradiction between their affinity for these characters on television and their opposition to equal rights for their real life counterparts.

This is how culture wars are won.