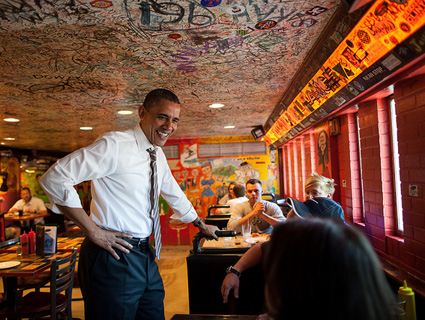 New Hampshire Sen. Kelly Ayotte was reading from the GOP script on Tuesday when she told a mostly-full Tampa Times Forum that President Obama “never even ran a lemonade stand.” It was a point the Republican party chairman, Reince Preibus, had made just a few hours earlier: “President Obama’s never run a company,” Preibus told the assembled delegates. “He hasn’t even run a garage sale or seen the inside of a lemonade stand.”

It’s a compelling line designed to hammer home Mitt Romney’s core message—the President has never worked a real job and he doesn’t know anything about business. The problem is it’s entirely false.

As Politifact detailed in 2009, in response to a similar allegation from MSNBC’s Joe Scarborough, Obama held a number of retail and food service jobs as a teenager in Hawaii—including scooping ice cream at Baskin-Robbins, which technically doesn’t serve lemonade but it does have a pink rasberry lemonade sorbet:

1975 or 1976 — ice cream scooper, Baskin-Robbins — Honolulu — Obama claims to have lost his taste for ice cream during this, his first job, the duration of which is not publicly known.

As Politifact noted, Obama held private-sector jobs as an adult as well, including posts at a Chicago law firm and a New York City company that helped American companies do business abroad—exactly the kind of experience Romney is accusing Obama of lacking. It’s a myth that hasn’t received as much attention as Romney’s debunked charges about Obama’s welfare policies, but in accusing the President of being coddled and oblivious, it’s no less pernicious.