In 2011, the United States experienced its biggest year ever in weapons exports: According to an annual study by the Congressional Research Service [PDF] released earlier this week, the US overseas weapons sales jumped to $66.3 billion last year (77.7 percent of the $85.3 billion global market in 2011), from $21.4 billion in deals in 2010.

In just one year, the US more than tripled its revenue in arms deals with foreign countries. The $66.3 billion also sets a new cash total record, easily surpassing the previous record of $31 billion in sales in fiscal year 2009. 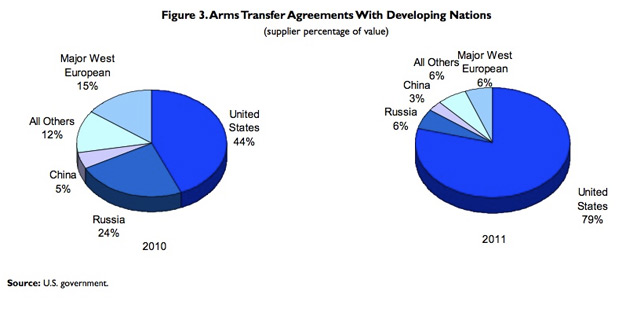 Yep. That’s us, on the right, doing a reverse-Pac-Man-death on overseas arms transfer agreements between 2010 and 2011.

The uptick was mostly fueled by demand in developing countries, which accounted for over $56 billion in sales from the US. Here are two more charts illustrating in constant dollars how America definitively pwns all others in flooding the arms market in the developing world: 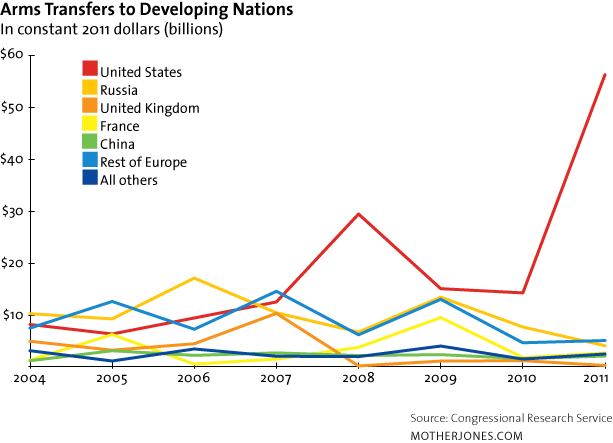 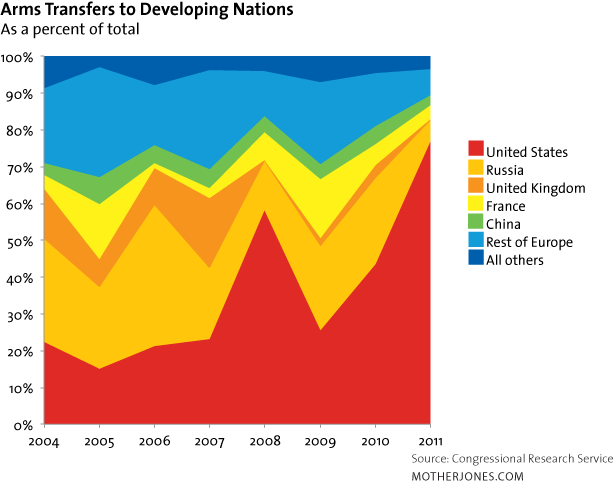 Much of the surge was driven exclusively by the ongoing freak-out over Iran: Saudi Arabia, Oman, and the United Arab Emirates (all Persian Gulf allies or partners of the United States) in particular started buying missile defense systems, fighter jets, and other hardware from the US at record levels, just in case Iran ever goes nuclear and tries to throw its weight around West Asia and the Gulf. Saudi Arabia’s $33.4 billion deal included dozens of F-15 fighter jets and Black Hawk helicopters. The UAE threw down $4.5 billion for a missile shield and other toys.

And in case you were wondering: In arms sales to both developing and developed nations, our closest competitor is Russia, which came in at a total of $4.8 billion in 2011—roughly 7 percent of what the United States hauled in that same year: