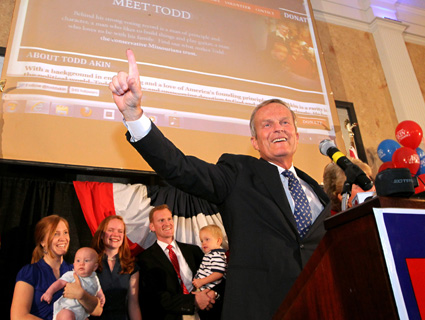 State and national Republicans are pushing Rep. Todd Akin (R-Mo.), whose “legitimate rape” remarks triggered a major backlash, to abandon his effort to unseat Democratic Sen. Claire McCaskill. Akin, nevertheless, is vowing to stay in the race. The Republican money machine, however, is already choking off financial support for Akin’s campaign.

Crossroads GPS, the biggest spending dark-money nonprofit in the 2012 elections, announced Monday it was pulling its ads from Missouri. On Tuesday, Crossroads’ president Steven Law called on Akin to leave the race. “Rep. Akin faces a simple choice: Will he help Democrats hold the McCaskill seat and potentially the Senate majority by staying in the race, or will he help Republicans defeat Barack Obama’s most reliable ally in the Senate by getting out?” he said in a statement emailed to reporters.

The National Republican Senatorial Committee also said it would no longer spend $5 million on the Missouri senate race unless Akin dropped out. An NRSC spokesman called Akin’s campaign “misguided” and said that Akin should “do the right thing” and drop out.

Despite Akin’s refusal to quit, Republican politicos say he’s doomed anyway if he doesn’t have the GOP’s biggest spenders fighting on his behalf. “He’s not going to get grassroots support from individuals; I don’t think he’ll get organized support by the party or 501(c)(4)s and I don’t know how you survive without that kind of support,” Bradley Blakeman, a GOP strategist, told Politico.

Outside groups that disclose their spending, such as super-PACs, have spent $4.8 million so far on the Missouri Senate race, according to the Center for Responsive Politics. However, dark-money groups including Crossroads GPS and Americans for Prosperity have spent upwards of $15 million on the race, much of it assailing McCaskill and her record. Americans for Prosperity spokesman Levi Russell declined to comment on whether Akin should quit the race. Russell added that AFP isn’t currently running ads in Missouri, and he wouldn’t comment about future ad spending there.

As I reported in my recent profile of McCaskill, Republicans see the Missouri Senate race as one of their best chances to oust a sitting Democrat. The GOP’s attacks against began McCaskill as early as July 2011 and haven’t stopped—until now. But after investing millions of dollars into the race, Akin’s gaffe casts a cloud of uncertainty over more spending going forward. “If he remains the nominee, there’s no reason to throw good money after bad by trying to win this seat,” Crossroads co-founder Karl Rove said Tuesday on Fox News. “This is one of those unfortunate things that’s so bad, so deplorable, so out-of-touch that there’s no way to recover, in my opinion, from it.”