…and this split screen tells you everything you need to know about the difference in quality between the two: 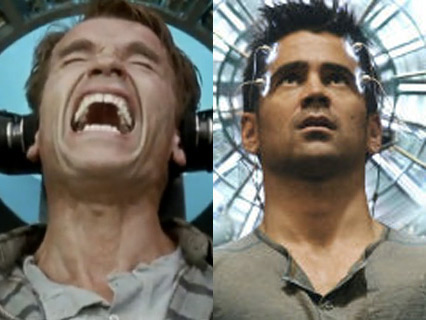 “IT’S NOT A TOOMAH.” YouTube ; Columbia PicturesSo to everyone who remade Total Recall and didn’t make it awesome…

To be fair, no one was actually expecting the Colin Farrell version of Philip K. Dick’s story to be as good as the Ahnold classic. But something this insipid and pathetically humorless? [Click here.]

The fact that the new film preserves the storied legacy of the triple-boobed hooker doesn’t make matters better one bit. Here are the five absolute most shameful things about Total Recall 2012 edition:

Has any review yet said “I totally recall liking the first movie better”?

For those looking for something less infuriating, stick to this video of the charming and funny Beckinsale chatting with Conan O’Brien about the bizarre fight choreography in the futuristic action flick:

The nonawesome, non-Schwarzenegger edition of Total Recall gets a wide release on Friday, August 3. The film is rated PG-13 for intense sequences of sci-fi violence and action, some sexual content, brief nudity, and language. Click here for local showtimes and tickets.