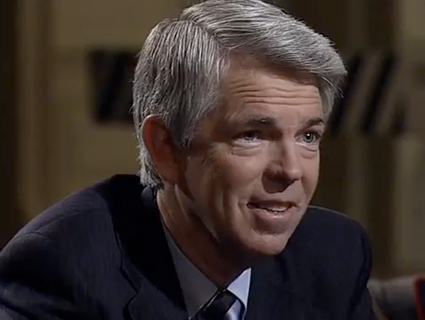 David Barton, during an interview with longtime fan Glenn Beck in April.<a href="http://www.youtube.com/watch?v=Z5cppSjYotc&feature=related">MercuryOneMemphis</a>/YouTube

For more a decade, the religious right’s leading authority on America’s founders and their divine inspiration has been David Barton, a fast-talking Texan with a bachelor’s degree in Christian education and a climate-controlled underground vault stocked with tens of thousands of antique documents, including Bibles, diaries, and correspondence. Barton has turned the study of America’s Christian roots into a lucrative business, hawking books and video sermons, speaking at churches and political confabs, and scoring a fawning New York Times profile and interviews on the Daily Show. He’s got friends in high places: “I almost wish that there would be like a simultaneous telecast and all Americans would be forced—at gunpoint no less—to listen to every David Barton message,” Mike Huckabee told an Evangelical audience in March of 2011. “I never listen to David Barton without learning a whole lot of new things,” Newt Gingrich told conservatives in Iowa that same month.

That’s probably because much of what David Barton writes seems to have originated in David Barton’s head.

On Thursday, Barton’s publisher announced that it was recalling Barton’s newest book, The Jefferson Lies, from stores and suspending publication because it had “lost confidence” in the book’s accuracy. That came one day after NPR published a scathing fact-check of Barton’s work, specifically his claim that passages of the Constitution were lifted verbatim from the Bible. NPR’s conclusion: “We looked up every citation Barton said was from the Bible, but not one of them checked out.” Likewise, although Barton frequently regales audiences with a story about how Congress commissioned the printing of Bibles in order to promote Christian values among the populace, NPR found that “Congress never published or paid a dime for the 1782 Bible.” Rather, “It was printed and paid for by Philadelphia printer Robert Aitken.”

Progressive watchdogs like People for the American Way have been on Barton’s case for years, but what’s different this time is that Barton’s biggest critics in recent weeks are his fellow Evangelicals. On Wednesday, World, an Evangelical news magazine edited by longtime Gingrich friend Marvin Olasky, published a story highlighting the new schism between Barton and his longtime allies:

Jay W. Richards, senior fellow at the Discovery Institute, and author with James Robison of Indivisible: Restoring Faith, Family, and Freedom Before It’s Too Late, spoke alongside Barton at Christian conferences as recently as last month. Richards says in recent months he has grown increasingly troubled about Barton’s writings, so he asked 10 conservative Christian professors to assess Barton’s work.

Their response was negative. Some examples: Glenn Moots of Northwood University wrote that Barton in The Jefferson Lies is so eager to portray Jefferson as sympathetic to Christianity that he misses or omits obvious signs that Jefferson stood outside “orthodox, creedal, confessional Christianity.” A second professor, Glenn Sunshine of Central Connecticut State University, said that Barton’s characterization of Jefferson’s religious views is “unsupportable.” A third, Gregg Frazer of The Master’s College, evaluated Barton’s video America’s Godly Heritage and found many of its factual claims dubious, such as a statement that “52 of the 55 delegates at the Constitutional Convention were ‘orthodox, evangelical Christians.'”

That’s to say nothing of Barton’s even more out-there theories, like his claims that Jesus opposed the minimum wage, the Founding Fathers denounced the Theory of Evolution, and the Sally Hemings affair was a liberal plot. Another evangelical professor, Warren Throckmorton of Grove City College, has co-authored a book, Getting Jefferson Right, that systematically debunks Barton’s theories about the the country’s third president. (Throckmorton has been a Barton critic for years, but this is far and away his most comprehensive takedown.)

Still, Barton isn’t backing down—at least not yet. In an interview with the Tennessean‘s Bob Smietana, he played his trump card:

Barton said he met with a different group of scholars recently and they approved of his work.

But he would not give any names, saying the scholars hadn’t given their permission for him [to] do so.

Given the pressure Barton is facing, those professional historians should be coming forward any day now. That, or critics will be left to wonder whether Barton’s Ph.D’s are as real as Harry Reid’s top-secret Bain investor.