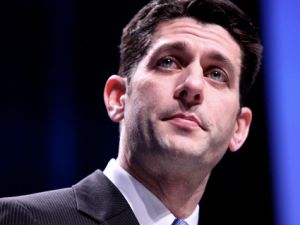 Late Friday, NBC News and the Huffington Post reported that Mitt Romney had chosen Rep. Paul Ryan (R-Wis.) as his vice presidential nominee. The two will hold a joint campaign appearance in Norfolk, Virginia on Saturday morning aboard the USS Wisconsin, before hitting the trail together in advance of the GOP convention in Tampa in late August. The appeal for Romney is obvious: Ryan is telegenic (he’s 42) with an impeccable reputation among conservatives as not just a policy wonk but a once-in-a-generation visionary. (For what it’s worth, he also catches catfish with his hands.) As New York‘s Jonathan Chait explained in a profile of Ryan in April, Ryan, more so than Romney himself, has become the face of the Republican party over the last two years.

But that’s also what makes Ryan’s choice such a wild card for the GOP and a potential gift for President Obama and downballot Democrats. His signature legislative accomplishment, an eponymous budget proposal that was passed by the House but died in the Senate, would gut the social safety net and then some. Over the next three months, expect to hear a lot of variations on this analysis, from the Center on Budget and Policy Priorities:

Chairman Ryan’s sweeping budget plan has been labeled “courageous,” but it’s a cowardly budget in a crucial respect. It proposes a dramatic reverse-Robin-Hood approach that gets the lion’s share of its budget cuts from programs for low-income Americans — the politically and economically weakest group in America and the politically safest group for Ryan to target— even as it bestows extremely large tax cuts on the wealthiest Americans. Taken together, its proposals would produce the largest redistribution of income from the bottom to the top in modern U.S. history, while increasing poverty and inequality more than any measure in recent times and possibly in the nation’s history.

Mitt Romney had already offered his tacit support for the Ryan budget. Now, he’s basing his campaign on it.

We’ll have more on Ryan in the next few days. In the meantime, read Ryan Lizza’s New Yorker profile of Ryan from last week, David Corn on the unseriousness of Ryan’s budget, Suzy Khimm on Ryan’s union soft spot, and check out Charlie LeDuff on the struggles of Ryan’s hometown of Janesville.