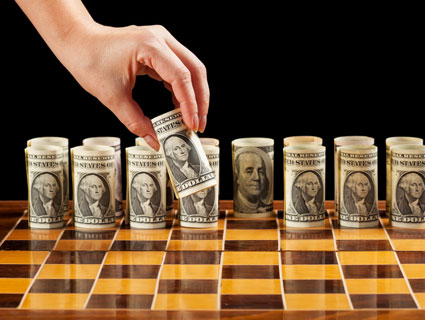 Since the mid-2000s, a small cadre of lawyers and activists has reshaped the role of money in American politics. Led by Senate minority leader Mitch McConnell (R-Ky.), attorney James Bopp, Jr., and law professor and activist Brad Smith, this group has won a string of victories that have imploded campaign finance laws. Citizens United? That was Bopp. Super-PACs? Thank Smith’s Center for Competitive Politics. The 2010 and 2012 DISCLOSE Act filibusters? All McConnell.

But it’s been rough going for the deregulators as of late. They’ve lost a slew of cases intended to gut existing political disclosure laws. They’ve failed to knock down bans on contribution limits. And despite their objections, the Internal Revenue Service has said it might revisit how it regulates dark-money nonprofit groups, which outspent super-PACs 3-to-2 in the 2010 elections and unloaded at least $172 million through June of this election cycle. “The free speech crew’s winning streak has hit a bump in the road,” says Neil Reiff, an election law attorney who used to work for the Democratic National Committee.

The reformers’ biggest recent win came in March, when a federal judge struck down a loophole that had let groups like the US Chamber of Commerce and Koch-funded Americans for Prosperity run ads without disclosing their donors. Rep. Chris Van Hollen (D-Md.) and several pro-reform groups had sued the Federal Election Commission, arguing the loophole contradicted disclosure laws passed by Congress. Judge Amy Berman Jackson agreed. A month later, Berman Jackson refused to delay her ruling from going into effect, thus forcing dark-money groups to rework their advertising strategies in order to keep donors secret.

In June, Bopp, the architect of the Citizens United lawsuit, lost a case called The Real Truth About Abortion v. FEC. Real Truth, a nonprofit organized under the US tax code’s 527 section, had wanted to run ads during the 2008 campaign attacking then-Sen. Obama without registering as a political action committee or disclosing its donors. So the group challenged the FEC’s own definition of what was and wasn’t a political ad, claiming the FEC’s rules violated the First Amendment. Nope, a federal appeals court said: The FEC’s definition was “a sensible approach” that “does not unlawfully deter protected speech.”

The courts also shot down two cases brought by other conservative attorneys that were intended to push the envelope on who can and can’t give money to political causes in America. In January, the Supreme Court upheld the 46-year-old ban on foreigners making political donations in Bluman, et al. v. FEC. Benjamin Bluman, a Canadian citizen temporarily working in the US, and Asenath Steiman, a Canadian-Israeli citizen also working here, argued that the ban on political contributions by foreigners violated the First Amendment. The Supreme Court, however, didn’t buy their argument; as Justice John Paul Stevens wrote in an earlier opinion, “We have never cast doubt on laws that place special restrictions on campaign spending by foreign nationals.”

Four months later, in Wagner v. FEC, a federal district court rejected a challenge to the 70-year-old ban on federal contractors making political donations. The court said the government’s “pay-to-play” ban was not unconstitutional because the ban protected against corruption or the appearance of corruption.

And last month, the reformers finally saw some success after repeatedly challenging the tax-exempt status of politically active nonprofit groups like Crossroads GPS, which was founded by Karl Rove; the American Action Network, run by former Sen. Norm Coleman (R-Minn.); and the pro-Obama Priorities USA. On July 19, the IRS sent a letter to the pro-reform groups Democracy 21 and the Campaign Legal Center saying the agency “will consider proposed changes” to how it regulates nonprofit groups. The letter was an unusual move by the IRS, and the reformers hailed it as a step toward reining in powerful dark-money groups.

Brad Smith, a former FEC commissioner who co-founded the deregulatory Center for Competitive Politics, admits that he and his allies’ winning streak of recent years is over. He notes that his side scored a victory when the Supreme Court in June refused to hear American Tradition Partnership, Inc. v. Bullock, a case billed as Citizens United 2.0; by not hearing American Tradition, the court’s conservatives signaled that they saw nothing wrong with their reasoning in Citizens United. But American Tradition wasn’t a new victory—it confirmed an earlier win. The way Smith sees it, the two sides in the political money wars are now locked in a bloody stalemate. Borrowing a war metaphor, Smith says, “There has been a sort of consolidation of lines. I would not say there’s a shift, at least not yet.”

Rick Hasen, a University of California-Irvine law professor who supports more limits on campaign spending, agrees. What’s more, Hasen adds, the battle lines between reformers and deregulators won’t stay static for long. Looming large is the fight over how much individuals and corporations can give to candidates, parties, and PACs. As early as next year, for instance, the Roberts court could consider a challenge to the Tillman Act, the century-old ban on direct corporate contributions at issue in the case US v. Danielczyk. “If the Supreme Court ever takes [the corporate contribution ban] back up, all bets are off,” Hasen says. That case represents a chance for Bopp and Co. to regain their momentum—and a surefire way to erase any memory of the reformers’ recent success.