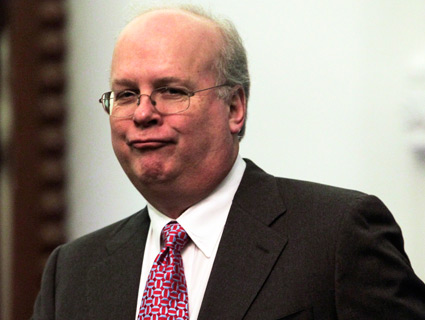 GOP political guru Karl Rove convened a group of roughly 70 Republican mega-donors Thursday morning at the elite Tampa Club to pitch them on giving millions more to his two-headed outside political juggernaut: American Crossroads, a super-PAC, and Crossroads GPS, a secretive nonprofit organization.

A Bloomberg Businessweek editor managed to get inside Rove’s exclusive meeting—and from her report, we now know precisely why reporters are usually kept out. During a discussion of the state of various US Senate races nationwide, Rove allegedly cracked a joke about whacking Rep. Todd Akin (R-Mo.). “We should sink Todd Akin,” Rove quipped. “If he’s found mysteriously murdered, don’t look for my whereabouts!”

One point Rove stressed to donors is that his Crossroads groups coordinate closely with the activities of other powerful outside groups, including the political operation run by the Koch brothers. “As many of you know, one of the most important things about Crossroads is: We don’t try and do this alone,” Rove said. “We have partners. The Kochs—you name it.”

Rove also put Crossroads’ total budget at $300 million—$200 million of that for the presidential race, the rest on House and Senate races. Here’s how the final pitch went down:

After screening a collection of television ads aimed at such Senate battleground states as Massachusetts, the fundraising began in earnest. CEO Law said that because of the “tremendous generosity” of many of the people in the room, American Crossroads is two-thirds of the way toward reaching its $300 million goal. But it still needs much more. With advertising rates going up and the necessity of “dealing with the gender-gap issue,” they could easily spend more than $300 million.

Barbour made the final pitch. “You all give so unbelievably generously. But you know what, I don’t have any compunction about looking you in the eye and asking for more,” he said. He compared the importance of a donation to American Crossroads in this cycle to donations made to “the charity hospital” or a “big not-for-profit cancer research program that you give to.”

“This is a high-stakes election,” he continued. “The consequences are greater than any election, and I know everybody in here wants their children and grandchildren to inherit the same country we did. I honestly believe those are the stakes.”