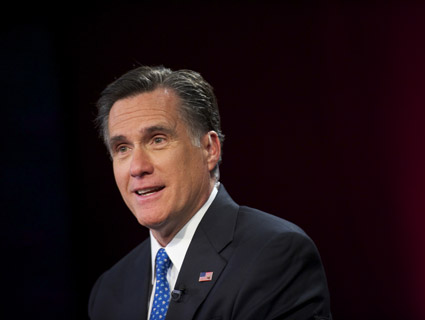 Mitt Romney just gave the Republican Party’s conservative base another reason to face-palm over their party’s presidential candidate. In an interview on Fox News Sunday, Romney said he “absolutely” supports returning to taxpayer-funded presidential elections if he wins in 2012 and runs for a second term in 2016. “To be competitive, we’re obviously following suit,” he said of his decision to forgo public financing, like the Obama campaign. “But I’d far rather have a setting where we had both agreed to the federal spending limits.”

It’s a strange statement for Romney to make, especially given his still-uneasy relationship with the Republican right. Conservatives, whom Romney needs to turn out in droves in key battleground states this fall, vehemently oppose taxpayers footing the bill for elections of any kind—local, state, or national. Conservative attorneys have made a career out of challenging and gutting public financing programs; recently they’ve scored wins doing just that in North Carolina and Arizona. One of the first acts of the current GOP’s House majority was a vote to repeal the federal public financing system. (The Democrat-controlled Senate did not follow suit.)

First conceived in the wake of the scandals of the 1974 presidential election, publicly-financed elections were seen as a way to ween candidates from the big checks and undue influence of private donors. Instead, a fixed amount of taxpayer money would be set aside for presidential candidates. Everyone from Ronald Reagan and George H.W. Bush to Jimmy Carter and Bill Clinton took public money for their presidential campaigns.

In 2008, Barack Obama sensed he could raise more money on his own, and so broke a previous pledge to accept public financing. He trounced McCain in the campaign money race, ultimately spending $730 million to McCain’s $333 million. This presidential campaign, it was never in doubt that Obama and Romney would reject public funds, teeing up the first general election since Watergate with neither candidate taking taxpayer money. Doing so would’ve capped the candidates’ campaign spending at $45.6 million during the primary season and $91.2 million in the general election. In contrast, the Obama campaign has spent $263 million and Romney team $163 million to date.

The Public Campaign Action Fund, a supporter of less money in elections, called on both candidates to offer plans to revamp the country’s outdated public financing system. “Both candidates like to talk about the influence of money on their opponent’s policies,” said David Donnelly, executive director of Public Campaign Action Fund, “but neither has offered a plan on how to address it.”