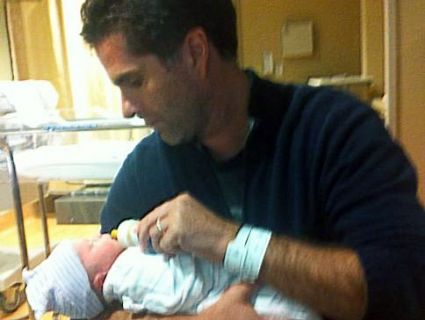 Now that Mitt Romney has chosen Wisconsin Rep. Paul Ryan as his running mate, Ryan’s long history as a culture warrior is getting a fresh look. Women’s groups have already honed in on his extreme anti-abortion record, which consistently has earned him a 100 percent voting approval rating from the National Right to Life Committee.

What isn’t so well known about Ryan’s record, though, is that one piece of legislation he supported is so extreme that it would have turned Romney’s children into criminals.

The Sanctity of Human Life Act, which Ryan co-sponsored, would have enshrined the notion that life begins at fertilization in federal law, thus criminalizing in vitro fertilization—the process of creating an embryo outside of a woman’s womb. In IVF, doctors typically create multiple embryos and then only implant the healthiest ones in the woman. Some of them stick and become babies, and some don’t. The embryos that don’t make it to the womb are either frozen for later use or destroyed. The Sanctity of Human Life Act, if passed, would make all those embryos “people” in the legal sense, so if they aren’t used or don’t become babies after being implanted, they would essentially become murder victims under the law.

In the more than 30 years since the world’s first “test-tube baby,” IVF has become a fairly common procedure and a lifeline to many infertile couples, Democrat and Republican, despite some of the thorny moral issues involved in the process. Some 60,000 babies every year are born thanks to IVF. Infertility is thought to affect some 10 to 15 percent of all couples in the US—especially those upper-class professionals who delay childbearing until their late 30s and early 40s. Infertility, in fact, is such a bipartisan problem that no fewer than three of Mitt Romney’s own children have relied on the procedure to produce some of his 18 grandchildren.

In May, Romney’s son Tagg became father of twin boys thanks to help from IVF and a surrogate mother. Tagg’s son Jonathan was also produced this way. Two of Tagg’s brothers reportedly have struggled with infertility issues and resorted to IVF as well. It’s hard to imagine that Romney will score any points with voters by tapping a running mate whose anti-abortion views are so extreme that Romney’s own kids can’t live with them.

Ryan’s position on IVF might give President Obama an opening for attack: While Romney’s running mate has advocated criminalizing a procedure that has brought untold joy to about 3 million families over the past three decades, Democrats might be able to claim credit for making advanced infertility treatments available to the vast majority of Americans who can’t afford them. Currently, most health insurance plans don’t cover infertility treatment, so IVF and other advanced baby-making technology is mostly available to rich people—like the Romney boys.

One estimate puts the cost of Tagg Romney’s new twins at more than $60,000, a price tag that puts IVF (and surrogate moms) totally out of reach for the average infertile couple. But Obamacare could change all that. The Department of Health and Human Services is currently drafting what’s known as the Essential Health Benefits Plan, a collection of conditions and other medical care that many insurance companies will be required to cover. There’s currently a push to have infertility treatments included as an essential benefit. Down the road, it’s possible that Obamacare will not only help thousands of people take care of their children, but also help them conceive them in the first place. As campaign issues go, this one couldn’t present a starker contrast. The supposedly pro-life GOP candidates want to turn infertile couples into criminals for trying to have a baby. The Democrats want to help them pay for it.