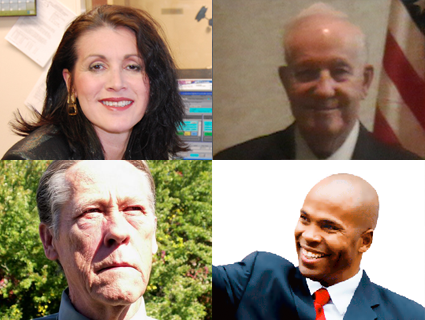 Mitt Romney has been the Republican Party’s presumptive nominee since April, but the 2012 presidential field is still more crowded than you might think: More than 400 candidates have filed statements of candidacy with the Federal Election Commission. You’ve probably heard of some of them, like comedian Roseanne Barr, Quran-burning pastor Terry Jones, and anti-abortion activist Randall Terry. But you probably haven’t heard of these wacky would-be presidents:

Lester Byerley MySpaceA fan of FDR who nevertheless filed as a Tea Party candidate, Byerley warns that Obamacare will “put people in jail for not buying insurance.” He recommends regularly consuming hydrogen peroxide to cure cancers, colds, and other viruses. By reducing the need for doctors and hospitals, Byerley’s cure-all would kill jobs, he conceded to the Philadelphia Weekly. “But human health should supercede everything, including the economy.” Byerley also said that as president he would “hand out Federal Reserve debit cards to anyone earning under $50,000 a year, and it’ll start off with $12,000.”

While working for the Reagan administration, Ashe claims, he developed a “program of time travel communications” that reached out “at least and no less than 500 years into the future.” He says he has transported sperm and DNA into the 24th century and has built flying saucers “that are capable of going to another solar system at high warp speed.” Ashe, a Democrat who has done stints in the Air Force, Army, and Navy, and owns the Jyperonix Astrophysics company, has been running for president since 2000. His hobbies include computers, pool, tennis, listening to “Snoops Dog,” and “inventing electromagnetic hover devices.”

“Dutch” Van Raam Project Vote SmartThe all-but forgotten Free Soil Party lives on through Van Raam, who says the party’s 1848 nominee, Martin Van Buren, is his favorite president. Unlike Old Kinderhook, Van Raam rides a Harley, loves nachos and Heather Graham, and has been a roller-derby referee. Other modern-day Free Soilers have questioned Van Raam’s claim to the mantle of the mid-19th century antislavery party, accusing him of being “a pirate with no honor.”

In an earlier age, Rutherford B. Hayes served as our 19th president. Today, Hayes (no relation) has ambitions to return his name to its former glory, vowing to rid Washington of “socialists, communists, and marxists, as well as sensatiable [sic] condescending egos.” He’d also reestablish the gold standard and get the country out of Afghanistan and the UN. Hayes is the former CFO of Miss Liberty America, in which contestants are judged in swimsuit, founding-father trivia, and marksmanship competitions. He says he responds to all of his prospective supporters’ Facebook messages, “even if someone’s being a turd.”

Jack Fellure Wikimedia CommonsFellure is a perennial candidate from West Virginia who has run for president as a Republican since 1988. This year, he switched his affiliation after winning the nomination of the anti-booze Prohibition Party, the country’s oldest active third party. Fellure’s platform is the Authorized 1611 King James Bible, the “supreme constitution and absolute authority in the affairs of all men for all time and eternity.” He seeks to protect the nation from a New World Order takeover orchestrated by “atheists, Marxists, liberals, queers, liars, draft dodgers, flag burners, dope addicts, sex perverts, and anti-Christians.”

Another throwback candidate, Trackwell is trying to revive the Bull Moose Party, which Teddy Roosevelt founded in 1912. During a recent bid for Topeka’s top job, he argued that his hometown’s mayors are “kind of the Vanna White of the city,” that is, high-profile champions of the working class. A former private eye and school janitor, he told WIBW TV that’s it’s high time to “get some common folks elected” and “take the billionaires out of politics.” He believes that Democrats and Republicans are members of “globalism parties” destroying America.

Laurie Roth laurieroth2012.comKnown as the “Annie Oakley of the airwaves,” Roth has been a right-wing radio host for the past decade. One of several birthers to enter the presidential fray, she was a plaintiff in one of Birther Queen Orly Taitz’s frivolous lawsuits challenging President Obama’s eligibility. But, Roth insisted, “I am not running for President as a gimmick to simply get me the standing to be able to sue Obama.” As president, she would strike down the National Defense Authorization Act and Obamacare since they violate the Constitution, outlaw all abortions, eliminate nearly all federal taxes, and wage war on radical Islam (PDF).

Andy Martin Wikimedia CommonsAnother regular candidate, Martin is considered to be the originator of the rumor that President Obama is a secret Muslim, something he told journalist Chris Hayes that he learned from “people in London, among other places.” Martin has filed hundreds of lawsuits over the years, including one against the state of Hawaii alleging that Obama is not a natural-born citizen. In 1993, a federal appeals court judge called him a “notoriously vexatious and vindictive litigator who has long abused the American legal system.” In 1996, Martin was arrested for attacking two TV cameramen and staged a nude hunger strike in jail. During his 2000 presidential campaign, he ran an ad accusing George W. Bush of using cocaine.

Leroy Saunders saunders2012.orgSaunders grew up hustling on the streets of Harlem with his mother. At 21, he was charged with drug trafficking; he discovered God in jail and vowed to quit dealing. Armed with a business management and corporate finance degree, he’s now running for president on an economic recovery platform and plans to recruit an eclectic mix of politicians for his administration, including former governors Eliot Spitzer, Mark Sanford, Jennifer Granholm, and Buddy Roemer. (It’s not clear if they have been notified of their anticipated roles in the Saunders administration.)

Weyer is a Los Angeles attorney who secured a patent in 2010 for databases that allow “online users to communicate with each member of a given group regardless of whether or not the member has an existing internet presence” (PDF). Because he claims that he first filed for the patent in 1999, Weyer is suing Facebook for profiting off his “invention.” He has also sued Mitt Romney, Newt Gingrich, and Rick Santorum for refusing to pay him $500 in royalties for their Facebook accounts. He’s also filed an FEC complaint alleging that Romney has been violating election laws by using campaign money to defend himself against the patent lawsuit (PDF). Move over, Winklevii!

Jonathon “The Impaler” Sharkey Wikimedia Commons• Jonathon “The Impaler” Sharkey: A perennial Republican candidate, professional wrestler, and drinker of human blood who dropped out of the race last year.
• Harry Braun: Fears we’re approaching a technological utopia in which medicine “will eliminate aging and disease” and we’ll all starve to death.
• Douglas Clement: Claims that his “father sold President Reagan a chainsaw.” (PDF)
• Pastor Wiley Drake: Prayed for the death of Barack Obama.
• Bob Leonard Forthan, who wants everyone to live in “dome houses” in a “cash-only society.”
• Herman Lee Goodman: Would give $1 million to every citizen who passes a background check, has 20 years of work experience, and owns a checking account.
• Rev. William Shaw: Told the FEC that “scientific research proves to me that I’m to be the only candidate to keep America safe.”
• Rocky Wang: Has declared his intentions to seek the vice presidency as a member of the Peoples Ping Pong Party (PDF).