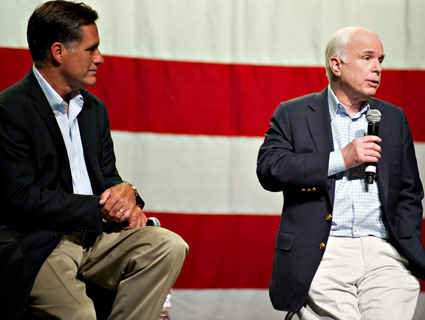 With the economy stuck in a slump, Mitt Romney ought to be soaring in the polls. Yet, thanks to his stumble-laden campaign, he is underperforming. In recent weeks, he has been on the defensive about his Bain Capital days and his refusal to release tax returns. A trip to England, Israel, and Poland did nothing to enhance his claims to either statesmanship or competence. He needs a game changer. And here’s one option: tapping John McCain as his running mate.

McCain is indeed a two-time presidential loser who has always had a tenuous relationship with the Republican Party’s base, and he and Romney don’t seem to be the best of buds after their bruising primary clash in 2008. But if it’s all about doing whatever it takes to become CEO of the United States, Romney might fare best with the veteran Republican senator as his wing man. Consider the following:

Romney has lurched so far to the right that he has undermined his appeal to independents. McCain was once the darling of this set.

There are possible drawbacks.

The veep nominee traditionally is the attack dog of the campaign. It would be a curious and compelling sight: McCain chasing after the guy who denied him the ultimate prize. He would have to hold back the bitterness—a tough task—and resist going all I-told-you-so. (Voters don’t like politicians who tell them they’ve erred.) But such a quasi-rematch would be dramatic and engaging. Think Rocky II. And if this confrontation were to overshadow Romney, that might not be detrimental for the campaign. Moreover, McCain can certainly sell the basic Romney policies with verve. He could provide a poignant testimonial: “When it comes to the most important decision a presidential candidate has to make, Gov. Romney definitely did a better job than I did.”

Would McCain accept an invitation from Romney? He’s not a natural No. 2. But if he can be convinced his presence on the ticket would boost Romney’s prospects—and would it be hard to persuade McCain of that?—wouldn’t the fellow who says Obama is running the United States into the ground have to salute and report for duty? John McCain: the final mission. Country First, and all that.

It’s not likely that Romney will heed this advice. There may be too much bad blood, and this course of action could violate the first rule of veep-picking: Do no harm. It’s possible to envision McCain running off the rails—or running off with the show. Yet it merits consideration. And there would be another advantage to selecting McCain: He has already released his taxes.