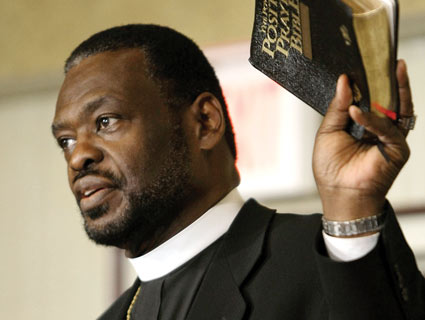 The parishioners at Bishop Harry Jackson Jr.’s Hope Christian Church in Prince George’s County, Maryland, are an eclectic mix. Some are in formal church garb; others wear sullen faces and casual dress, as though they would not be here but for sins committed the night before. Ushers shepherd elderly congregants to their seats as dancers in beige tunics and multicolored sashes dance feverishly to the congregation’s singing.

Read more about NOM and the Mormon Church’s crusade against gay marriage.

She then recounts how she accidentally stumbled upon a gay-pride parade the day before. A parishioner sitting next to me spits the word “pride” and shakes her head. The preacher describes a pregnant woman she saw at the event. “She had an entire belly exposed, and she had a rainbow painted on the belly,” the preacher says, her face wrenching in disgust. The congregation gasps. “Brought this thing on the unborn baby.”

As Maryland has become ground zero in the culture war, Jackson is on the front lines. In February, the state legalized same-sex marriage. Now a ballot initiative to overturn that law awaits voters in November, and activists led by the National Organization for Marriage believe they can prevail by appealing to African Americans, particularly socially conservative churchgoers. Some of the biggest mega-churches in the country are in Maryland, notes Derek McCoy, an associate pastor at Jackson’s church and the director of the Maryland Marriage Alliance, an umbrella group bankrolled in part by NOM. “The difference is they’re African American.”

NOM believes that stirring up anti-gay-marriage fervor among black voters has helped it win referendums in other states by pitting two groups of loyal Democrats against each other. As internal documents released during Maine’s investigation into the group’s finances asserted, “The strategic goal is to drive a wedge between gays and blacks—two key Democratic constituencies. Find, equip, energize and connect African American spokespeople for marriage; develop a media campaign around their objections to gay marriage as a civil right; provoke the gay marriage base into responding by denouncing these spokesmen and women as bigots.”

Jackson is exactly the kind of African American spokesperson the NOM memo envisions. “There’s been a hijacking of the civil rights movement by the radical gay movement,” he said on CNN after backing California’s Proposition 8 in 2008. “You can’t equate your sin with my skin.” He has received $20,000 from NOM’s education fund and has rallied support for same-sex marriage bans in Florida and Washington, DC, where he joined Councilmember Marion Barry to oppose a marriage equality bill in 2009.

As the head of the political action committee Stand4MarriageDC, Jackson was meant to be the voice of local opposition (he had a condo in the city). NOM’s fingerprints, however, were obvious: The two groups shared an address; NOM gave Stand4MarriageDC direct financial support; and Brian Brown, NOM’s executive director, was its treasurer. The measure passed, and NOM then spent tens of thousands of dollars trying to unseat councilmembers who supported the bill, without success.

Enlisting minority spokespeople to deflect accusations of bigotry is nothing new. But the anti-gay-rights movement is going further in using black preachers like Jackson to battle the very idea that marriage equality is a civil right.

The strategy taps into a genuine ambivalence. “The older generation in the African American community, they kind of bristle at the fact that same-sex marriage is being compared to the civil rights movement,” says Maryland Delegate Keiffer J. Mitchell, who represents part of Baltimore and voted for gay marriage. “People would throw bottles, cuss at us, say all sorts of names, just because of the color of our skin,” McCoy recalls about his childhood in the South. “So I can’t imagine that we can equate the redefinition of marriage to the civil rights struggle.”

NOM, whose leadership is tied to the Mormon church, and the Maryland Marriage Alliance contributed more than half of the money used to collect signatures to put a referendum banning same-sex marriage on the Maryland ballot. The financial records of the committees backing and opposing the referendum itself won’t be released until late October.

Details on the funding for Jackson’s personal organization, the High Impact Leadership Coalition, are also murky. The group, which shares an address with Jackson’s church, spent $40,700 trying to defeat marriage equality in DC. It describes itself as a nonprofit and solicits tax-deductible donations on its website. However, it is not listed in current IRS or charity databases, and its trade name registered with the state of Maryland lapsed in 2011. HILC’s name was originally registered by an organization headed by Jackson’s wife that lost its tax-exempt status after failing to file federal tax forms. (Mother Jones sought comment from Jackson but received no response.)

Might Jackson be fighting a losing battle? Nationally, polls show rising support for same-sex marriage, even among African Americans. After President Obama endorsed marriage rights in May, a poll of black Maryland voters showed them flipping from 56 percent opposed to 55 percent in favor of gay marriage. Gay rights opponents were unable to stop Maryland’s marriage equality law once Gov. Martin O’Malley put real muscle into getting it passed. Most black legislators voted for it. Yet gay marriage foes remain confident that they can keep winning at the ballot box. “Every time people go to the ballot box in 32 states they’ve won,” McCoy says. “The voters see this differently than the polling results.”

But NOM and its allies may be overestimating the power of their wedge strategy. “It’s wrong and disingenuous to pit blacks against gays, which is what the media has done,” says Baltimore Delegate Jill Carter, who supports same-sex marriage rights. “I’m not wedded to my religion over civil rights and the Constitution.” Reverend Delman Coates, who testified in support of marriage rights in the Maryland Legislature, explains that on many issues “the views of the people in the pews tend to be much farther along than those of us in the pulpit.” Though he’s faced criticism from a few of his fellow pastors, he says a greater number have quietly expressed support. Perhaps the most important endorsement has come from the new parishioners who have arrived at his church since he made his views public.

“There’s a difference between the ‘black church tradition,’ and a church of blacks,” Coates says. Pastors like Jackson “are often selected by interests outside of our community, and funded and promoted in ways that represent interests that are not in keeping with the historic tradition of freedom and equality. That’s the black church tradition.”