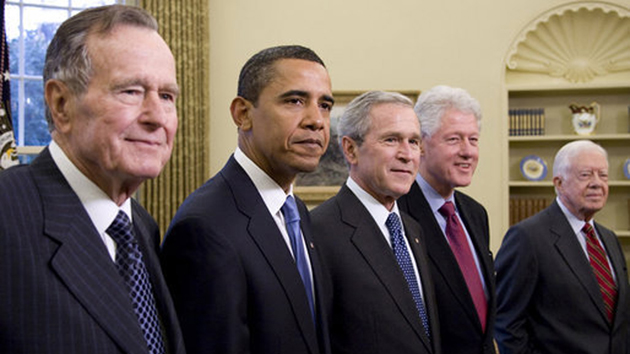 Eight years ago, Democrats were so nervous about the GOP’s perceived advantage on national security issues that they nominated a Vietnam veteran who walked up to the podium in Boston and saluted, proclaiming, “I’m John Kerry and I’m reporting for duty.”

With Kerry’s line at this year’s convention—”Ask Osama bin Laden is he is better off now than he was four years ago”—Democrats have adopted the kind of language that might have been derided as “cowboy rhetoric” four years ago. And Kerry wasn’t the first or last speaker to invoke Bin Laden in Charlotte last week. Asking for four more years of Obama, Vice President Joe Biden intoned that “Osama bin Laden is dead and General Motors is alive!” Eight years ago, Democrats trying to act tough on national security sounded like kids playing pretend; at times, this year’s convention sounded like a Roman triumph.

Though Democrats frequently refer to Bin Laden as having been “brought to justice,” it is more accurate to say that those who perished on 9/11 have been avenged. With the terrorist leader’s death has come another kind of payback: Democrats are now at ease with the belligerent pageantry that was once a hallmark of their Republican rivals. Last Friday, Republican presidential nominee Mitt Romney awkwardly attempted to explain to Fox News why he didn’t mention Aghanistan, America’s longest running war, in his convention speech. “You talk about the things that you think are important,” Romney said. Imagine what Karl Rove could have done with that.

Barack Obama has a plan to withdraw troops from Afghanistan, but neither candidate actually has a plan to end the war that started on September 11, 2001. Both parties accept that conflict as a permanent feature of American life. An American citizen in the US is as likely to be killed by their own furniture as a Muslim terrorist, but fear of violent Islamic extremism has changed this country almost irrevocably.

In 2008, Democrats challenged warrantless surveillance and pledged to “revisit” the PATRIOT Act. Now the president is a Democrat who left much of those policies in place. The 2012 platform is silent on the PATRIOT Act, as it is on nearly all of its 2008 promises to roll back war on terror powers. The 2012 Republican platform, meanwhile, nods at the idea that the government can indefinitely detain an American citizen suspected of terrorism, promising only to “ensure the protections under our Constitution to all citizens, particularly the rights of habeas corpus and due process of law.” It does not promise that Americans suspected of terrorism will get a trial.

The House is set to vote this week to reauthorize the Foreign Intelligence Surveillance Act, which allows warrantless surveillance of American citizens as long as they’re communicating with someone abroad. Although the bill is not likely to pass the Senate before the November election, it will eventually be signed, regardless of who wins. From body scanners and pat downs at airports to the growing public-private partnership that is the American intelligence industry, from immunity to torturers to prosecutions for whistleblowers, there are no signs of demobilization in the war on terror. It’s a post-9/11 paradox: the more we beat Al Qaeda, the more we accept the ways we’ve changed to beat them.

For the Bush veterans not driven insane by partisan derangement (or whose professional careers don’t require them to be partisan team players) this continuity has brought relief. Speaking before an audience at the University of Michigan last Friday, former Bush-era CIA Director and NSA chief Michael Hayden, who identified himself as an adviser to Romney, said he thought the forever war was in good hands no matter who wins in 2012. “I actually expect there’s going to be some continuity between a president Romney, and his predecessor too,” Hayden said. “I actually think all these things that seem to carry over from [the 43rd president] to [the 44th president], will carry over to [the 45th].”

The troops will come home from Afghanistan. But the war that began on September 11, 2001 may never end. Having finally figured out how to play the game, the Democratic Party no longer even seems to want it to end. Democrats haven’t fallen to the same depths as the GOP did in 2006, when President Bush said that the Democratic approach to Iraq meant “the terrorists win and America loses.” But there’s no point in calling a truce in the counterterrorism culture war when you’re winning.