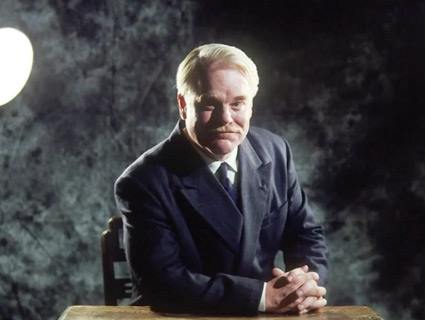 The Master
The Weinstein Company
137 minutes

The Master is the kind of movie destined for dissection and canonization by critics and film students for eons to come—and for all the wrong reasons. It’s tremendously ambitious and gorgeously shot (in 65mm, no less). It’s the latest big-screen offering from the sadly not very prolific writer/director Paul Thomas Anderson, the brilliant 42-year-old maestro behind classics like Magnolia (1999) and Punch-Drunk Love (2002). The film stars Philip Seymour Hoffman, Joaquin Phoenix, Laura Dern, and Amy Adams, all of whom have built filmographies that speak volumes for themselves. Hell, Radiohead’s lead guitarist Jonny Greenwood is back working with Anderson on the score!

It’s the type of movie you’d be silly not to root for. And yet The Master achieves little more than being a film of ravishingly empty beauty, choked off by an untiring indulgence in flat visual metaphor.

I take no joy in typing this. As a fan of Anderson’s challenging, often beautiful work (he has an eye for character, photography, and epic sweep that few of his generation possess), this letdown stings just as badly as the pangs of disappointment felt after Pixar disproved the longstanding theory that they are incapable of making a bad movie.

What makes this even sadder is that the premise of The Master holds so much much lip-smacking potential. Freddie Quell (Phoenix) is a lonely, directionless WWII vet. He’s slovenly, can’t hold down a job, and gulps down wicked strong alcohol by the hour. Serendipitously, he boards a party yacht as a stowaway and meets the boat’s captain, Lancaster Dodd (Hoffman). “I am a hopelessly inquisitive man, just like you,” Lancaster purrs in a pure, transatlantic tenor, upon their introduction.

Lancaster looks a lot like L. Ron Hubbard, founds a kooky, self-help style religion in the ’50s, just like Hubbard did, and is frequently charged with being a fraud and huckster, much like Hubbard was. The film is also set in the same year Scientology was founded. (Do with this information whatever you’d like.) Freddie quickly joins the ranks of Lancaster’s disciples. And from there, their relationship grows, strains, and strains some more.

Warning: Do not expect this to be There Will Be…Scientology. The vast majority of the promo materials—trailers, TV spots—is focused on selling The Master as foreboding, dark, and violent, in the same vein as Anderson’s 2007 Oscar contender. Here’s one ad that attempts to do so:

In certain promos, you see Amy Adams (who plays Peggy Dodd, Lancaster’s true believer of a wife) firing a long gun. In fact, not a single firearm is discharged in the entire movie, even in war scenes. Despite some spurts of emotional intensity, The Master is a far quieter, softly contemplative kind of picture.

The film scores points with the controlled heat and riveting drama of a handful of notable moments. The best scenes are built around close-ups of Phoenix and Hoffman’s faces, as the pair shouts, cries, sweats, and/or sings a cappella at one another. The most savagely arresting of the bunch comes when Lancaster conducts a Dianetics-inspired survey with Freddie, in which the mercurial newcomer comes within inches of combusting. “Is your behavior erratic?” Lancaster inquires, while Freddie fidgets and holds back a flood of tears. “Do you find it easy to be fair…Do you linger at bus stops…Are you concerned with the impressions you make…Have you ever had intercourse with a member of your family?” The sequence is punishingly hypnotic.

Every actor’s performance is spot-on, and the film is bathed in just the right palette of colors. Anderson, as per usual, goes big on atmospherics. And that’s where the fun stops.

The scenes worth committing to memory are sparse, and far too much of the movie feels instantly miscellaneous. Whether the characters are riding motorcycles or getting sloppy drunk and naked en masse, there’s a sense of grand pointlessness to the narrative. Gone is the uncompromising energy that pervaded even the muted moments in Anderson’s previous efforts. Also missing is any desire whatsoever to hand the audience a pay-off. (It also doesn’t help that the film’s deliberately gradual pacing frustrates and alienates more often than it absorbs.)

Due to its heavily meditative nature and the prolonged, slow-boil brooding, The Master easily lends itself to academic overanalysis and heinous over-interpretation. (How does this all tie into the Church of Scientology? What are the specific theological arguments? Was it all about an ex-girlfriend?) But the two-and-a-half-hour affair proceeds with a committed torpor that makes it seem as if nothing is at stake. In the end, vague symbolism in mountains, ocean waves, and scowls—no matter how lusciously filmed—isn’t enough to compel and provoke.

Given the massive talent invested in this, proceed with severely slashed expectations.

The Master gets a wide release on Friday, September 21. The film is rated R for sexual content, graphic nudity, and language. Click here for local showtimes and tickets.