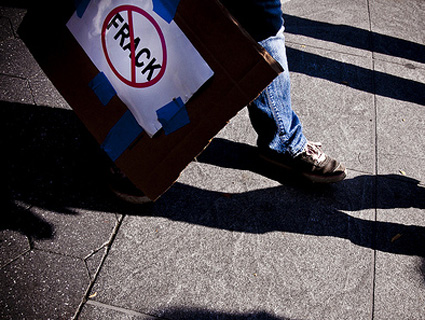 Many states don’t require companies that use fracking technology to disclose what exactly is in the fluids they inject into the ground. The fracking fluids, which combine chemicals, water, and sand, have been found to include toxic diesel-based chemicals, so there’s a lot of interest in what companies are using.

Some states do require at least partial disclosure of those chemicals, as my colleague Tim McDonnell has highlighted. But as EnergyWire reported on Wednesday, even in places where companies are filing disclosures, two out of three companies are claiming exemptions for some of the ingredients as “trade secrets”:

At least one chemical was kept secret in 65 percent of fracking disclosures by companies that said they needed to protect confidential business information, according to a review of PIVOT Upstream Group’s D-Frac database done for EnergyWire.

Critics of drilling say the widespread use of such “trade secret” exemptions undermines the industry’s assurances that drillers are being open with the communities where they are “fracking” wells and producing oil and gas.

Seeking to protect fracking fluid ingredients as proprietary information is certainly not new for the industry. Companies have previously claimed that, just like Coca-Cola, their products are safe and the special formula is top secret. Critics of the industry believe, however, that the “trade secrets” claim is used to avoid disclosing chemicals that are potentially harmful.