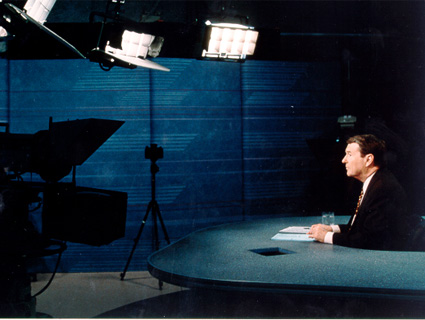 On October 3rd, Barack Obama and Mitt Romney will face off in the first of three debates, this one on domestic policy. It could be a chance for Romney to regain lost ground after his week from hell, but for a few environmental groups the focus is less on the candidates and more on the moderator, PBS’s Jim Lehrer. The question: Will he ask about climate change?

Just after the debate moderators were announced, the League of Conservation Voters began collecting signatures—60,000 so far—to petition Lehrer, a veteran presidential debate moderator, to ask the candidates how they plan to deal with the climate crisis. Other groups have since folllowed suit, including the Environmental Defense Fund and Al Gore’s Climate Reality Project. They plan to officially deliver the petitions to Lehrer next week, LCV spokesman Mike Palamuso said.

“Even if the candidates were endorsing climate action at every campaign stop, there’s such a bigger audience for the debates that we want to make sure this is part of the conversation,” he said.

The odds aren’t particularly good: On Wednesday Lehrer announced the broad topics he would bring up in the debate, none of which address the environment directly. And just this week PBS’s NewsHour program, which Lehrer edits, came under fire for “balancing” a segment on climate change with a diatribe from Heartland Institute-connected meterologist and climate change skeptic Anthony Watts.

But hey, anything is possible. PBS spokeswoman Anne Bell wouldn’t comment on Lehrer’s plans, in part because she doesn’t know them: Tweaks are often being made right up until the red light turns on. Still, he’s always open to suggestions, she said.

“He takes in tons of information, and as for how he processes it out, that’s his own magic formula.”