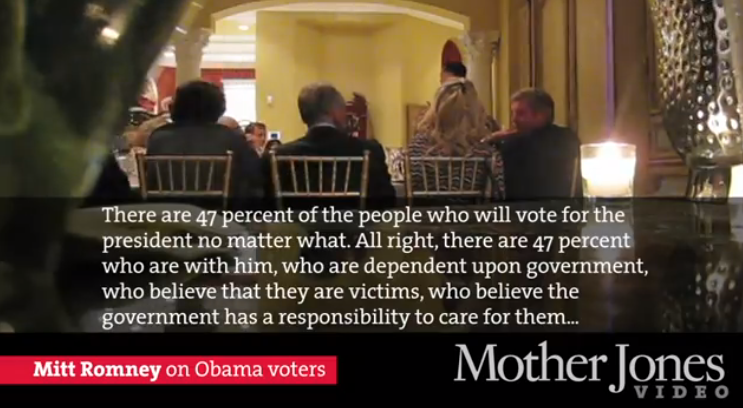 Memo to Mitt Romney: The majority of Americans do not agree with you that the 47 percent of Americans who don’t pay federal income taxes are Obama-voting government mooches who believe they’re “victims” and won’t take responsibility for their own lives.

Romney fared worse in the Post-ABC News poll. Fifty-four percent reacted negatively to his 47 percent remarks, while 32 percent reacted positively. The partisan split on the 47 percent line is fairly predictable: More than 75 percent disliked the remarks, and two-thirds of Republicans agreed with Romney. What’s most notable, perhaps, is how those coveted independent voters felt about the 47 percent claim: 57 percent of indies felt negatively while just 27 percent saw them favorably.

The Washington Post‘s Jon Cohen points out that the backlash to Romney’s 47 percent statement coincides with an uptick in voters’ negative views of Romney and his campaign. Sixty-one percent of those polled hold a negative view of how Romney’s running his campaign. “That number,” Cillizza writes, “is up significantly from July—the near-certain result of the much-publicized comments by Romney.”

In case you missed it, you can watch the full Romney fundraiser video—including the 47 percent comments—here.