On Thursday evening, Anahita Nemat, a conservative PR specialist living in Northern Virginia, tweeted out this photo, with the description: “Received my first mailer from @MittRomney & @PaulRyanVP today. It talks about Lyme Disease. Huh? I’m confused! Why?” 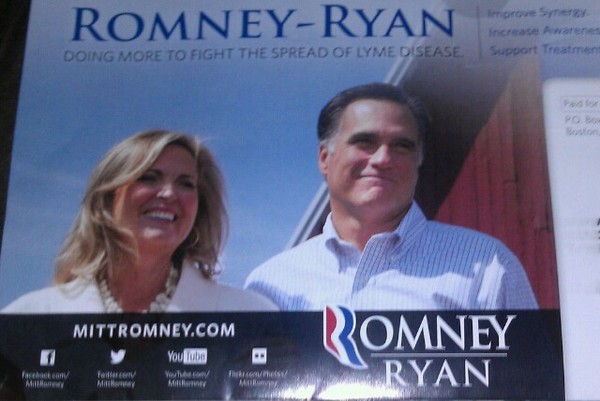 We were confused too. But it turns out that Romney has, over the last few months, actually made Lyme disease—the bacterial disease transmitted to humans from deer ticks—part of his pitch to suburban Virginia voters. It started back in August, when he sent a public letter (paid for by the campaign) to Rep. Frank Wolf (R-Va.) commending him for his push to create a “Tick-Borne Diseases Advisory Committee.” “More needs to be done,” Romney wrote. “As president, I will work to ensure that more attention is focused on this important issue … We need to ensure that all scientific viewpoints concerning this illness can be heard.”

Incidentally, the letter, which was sent out on August 4th, wasn’t picked up by the press until this Thursday, when the Washington Examiner reported on it as part of a “bid for worried moms in the outer suburbs populated with whitetail deer and other wildlife.”

As it turns out, Romney is actually injecting himself into an intense dispute within the medical community, pitting the International Lyme and Associated Diseases Society (ILADS) against the Infectious Diseases Society of America (IDSA). IDSA believes there is “no convincing biological evidence” that Lyme is a chronic infection, while ILADS thinks there are flaws with the current testing system. Wolf and Smith have aligned themselves with ILADS, which is reflected in their bill and other public statements.

Here’s the problem, though. That Lyme disease epidemic Romney is so concerned about? The spread of the disease is aided and abetted by climate change. Lyme Disease already costs the US $2.5 billion annually, is expected to double in geographic scope over the next 70 years. But Romney has said government should do nothing to stop man-made climate change—if it’s even happening at all. “My view is that we don’t know what’s causing climate change on this planet,” he said at a debate last October. “And the idea of spending trillions and trillions of dollars to try to reduce CO2 emissions is not the right course for us.”

I won’t pretend that I know exactly what the Romney campaign is doing here, except to note that it’s tough to micro-target any deeper than a mailer talking about ticks. An obscure subsection of Virginia law requires that I ask University of Virginia political science professor Larry Sabato about all such Old Dominion issues, but in an email, the campaign guru professed ignorance: “VA is home to some Lyme disease, but I would never have guessed that it was a presidential level issue!”

Perhaps the campaign has some data that shows that this kind of targeted mailing will drive up his favorables among, say, middle class, politically moderate moms who like to hike. Or maybe they’re just trying to get under Obama’s skin.

Update: The Weekly Standard‘s John McCormack has the full mailer.

Find an unusual political pamphlet in your mailbox? Give us a shout: tmurphy [at] motherjones [dot] com.