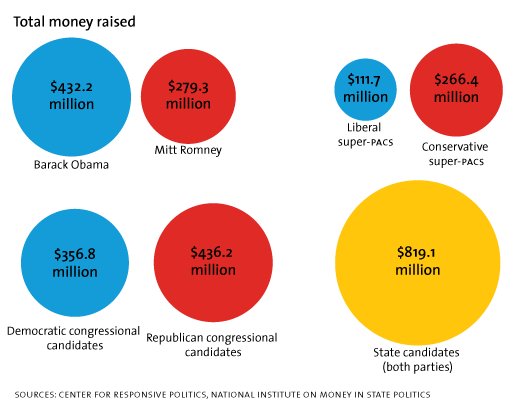 QUOTE OF THE WEEK

“Throughout its existence, [our nonprofit] has regularly consulted with experienced tax counsel to ensure it is in full compliance with the federal tax laws.”
—A statement to ProPublica from the Government Integrity Fund, defending its 501(c)(4) tax-exempt status despite spending more than $1 million favoring Republican Josh Mandel in his challenge against Sen. Sherrod Brown (D-Ohio). The Fund is a so-called “social welfare” group, which can’t make politics its primary purpose. What that means, exactly, has been an ongoing discussion this year. The IRS is investigating potential violators of the rule, but it hardly ever audits nonprofits.

attack ad OF THE WEEK

At Wednesday night’s debate, Mitt Romney declared, “I like PBS” and “I love Big Bird,” but “I am not going to keep spending money on things [we have] to borrow money from China to pay for.” (Just .00014 percent of last year’s federal budget was spent on PBS.) After the debate, the liberal super-PAC American Bridge 21st Century released two web ads hammering Romney. The one below criticizes the candidate’s offshore bank accounts, then switches to a scene showing Big Bird getting smashed by an anvil. American Bridge, which has spent more than $6 million supporting Democrats in the 2012 election, also rolled out a series of depressing images of Sesame Street characters bemoaning Romney’s policy positions.

stat OF THE WEEK

$1.84: The reduced cost, per gallon, of gas that the Koch-affiliated 501(c)(4) Americans for Prosperity has been offering on a tour that has hit Nevada, Iowa, and Michigan. The reduced cost, offered to about 100 to 150 motorists per gas station, is meant to reflect the cost of gas when Bush left office (conveniently not mentioned is that the low cost was thanks to the economic crisis). Thus far, AFP has also spent more than $30 million on ads attacking Obama.

charts OF THE WEEK

The Sunlight Foundation has a series of eight charts exploring where the money is going to House races, organized by the Cook Report’s likely victor ratings. Below, the first chart shows total amounts of money in House races; the second, which shows outside spending, suggests that while incumbents tend to have an overall cash advantage, super-PACs and nonprofits often favor their opponents. (Also: Don’t miss Sunlight’s Senate elections charts.)

• Ralph Reed’s Group: An Obama Victory Means “He Can Complete America’s Destruction”: The nonprofit run by the ex-Christian Coalition leader blankets voters with grab bag of right-wing Obama hatred.
• Are Super-PACs Overhyped?: Sure, they’re blowing rich donors’ money. But don’t write them off quite so fast.
• Are your dark-money donations tax-deductible? Wall Street Journal
• Suggestions from tax experts on how to remove dark money from the shadows. Roll Call
• Jonathan Alter explores the role of small money in Citizens United-era politics. Bloomberg