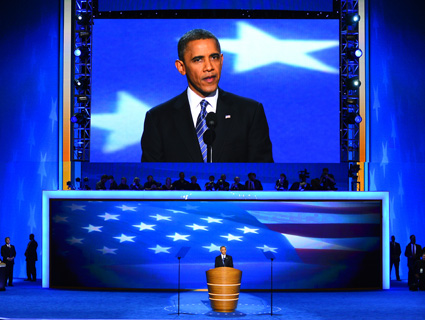 In the lead-up to their party’s convention in Charlotte last month, top Democrats vowed to fund their every-four-years gala solely with individual donations. “We will make this the first convention in history that does not accept any funds from lobbyists, corporations, or political action committees,” Rep. Debbie Wasserman Schultz (D-Fla.), the DNC chairwoman, said last year. That pledge, it turns out, was a whole lot of bluster.

New election filings show that the Democratic National Convention benefited from millions in corporate cash. The convention took in at least $5 million in corporate money to rent the Time Warner Cable basketball arena that served as the convention hall. Convention officials also tapped almost $8 million from a line of credit from Duke Energy, a Charlotte-based electricity company with close ties to the Obama administration. The DNC banked a million more in in-kind contributions from corporations such as AT&T, Bank of America, Coca-Cola, Microsoft, and Costco. Labor unions gave nearly $6 million to the convention as well, according to the Center for Responsive Politics.