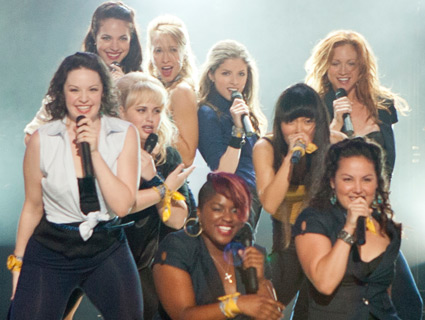 The movie includes a cabal of incessantly mocked “deaf Jews.” It makes a shameless rape-whistle joke. It features a prolonged sequence in which a naked, cowering college girl is harassed by another naked college girl in a cold dormhouse shower. And then there’s a scene toward the end of a woman spewing a couple gallons of projectile vomit (like she’s in a Sam Raimi movie) at a gathering of several other young women, thus instigating an orgy of kick fighting, and causing a petite Korean with limited social skills to collapse into the plashet of lady bile and spontaneously start to snow-angel.

Nope. That was the newly released Pitch Perfect, a cuddly PG-13 rated movie that’s all about self-discovery and a cappella remixes of Kelly Clarkson and other top-40 fixtures.

And despite this less-than-flattering description, I can’t recommend it highly enough.

The film, directed by big-screen newcomer Jason Moore, takes place at the fictional Barden College, where a cappella reigns supreme. The struggling all-female Bellas are trying to dethrone the all-male Treble Makers as regional (sectional? national?) champs. The Bellas, once a monochrome of leggy queen-bees, has degenerated into a grab-bag of misfits and questionable talent, led by the affable Chloe (played by Brittany Snow) and the conservative and high-strung Aubrey (Anna Camp). And in walks freshman Becca (Anna Kendrick), with her myriad body-piercings, lack of skirts, and fashionable grumpiness, who shakes things up with her talent for DJ-ing and spittin’ rhymes. A volley of song-and-dance transpires.

To top things off, this movie is loosely based on a non-fiction book by GQ editor Mickey Rapkin—a book that bears the subtitle “The Quest for Collegiate A Cappella Glory.”

Sounds insufferable, right? After all, it’s pure formula and reeks of a desire to cash in on the post-Glee market. And to be perfectly honest, the film never rises above being just a little bit stupid. But against all odds, Pitch Perfect emerges as one of the year’s most surprising crowd-pleasers. The a cappella covers of overplayed pop are completely infectious, pulled off with sleek rhythm and smooth harmonies. The leads are towering in their likeability. And the pacing is crisp enough to counteract the adverse effects of dumb jokes and a daddy-issues subplot.

Think of this as the Bring It On of musical comedies—a paint-by-number but compulsively watchable teenage fantasy that ends up spawning a devoted following…and the inevitable rash of direct-to-DVD sequels (and—why not?—a Broadway musical).

Pitch Perfect scores points with a supporting cast (from Project X‘s Alexis Knapp as the amorous Stacie, to comedienne Rebel Wilson as the cocky “Fat Amy”) that gets the job done, and key players (mainly Kendrick and Snow, both of whom exhibited musical talent in previous roles) who mask the script’s inherent silliness with sharpened comic timing and vocal chops that genuinely impress. Kendrick in particular—sardonic and quick-witted—continues to cement her status as one of her generation’s most adept 20-something actresses.

But it’s the foot-tapping soundtrack that singlehandedly sells the movie. Exhibit A: An inventive mash-up of Bruno Mars’ “Just The Way You Are” and Nelly’s “Just a Dream”:

Moreover, there’s the epic medley of the “Riff Off,” the annual Barden a cappella showdown where participants wield inpromptu song choices and blatant sex appeal as their weapons. The highlight comes at the clip’s 1:25 mark, during which Kendrick busts out Blackstreet’s “No Diggity”… and displays astoundingly good flow for a five-foot-tall Irish Broadway singer from Portland.

To cap off my gushing over this giddy, frivolous little movie, I’d like to insert a brief note on viewer and critic assumptions. The advertisements made the movie look like garbage. The screenplay has cookie-cutter written all over it, and then some. On a personal note, there are fewer things I find more grating and discrediting to modern society than single-gender college a cappella. And yet I was charmed into submission, and smiled like an idiot for nearly two hours.

Just to recap the last few months: I thought The Master was disappointingly meh, adored Battleship, loathed The Hunger Games, and somehow really dug Pitch Perfect. This has been without a doubt one of the strangest, most expectations-quashing series of months I’ve ever had at the movies. It’s the sort of thing that makes me chuckle and sob at the same time.

Pitch Perfect gets a wide release on Friday, October 5. The film is rated PG-13 for sexual material, language, and drug references. Click here for local showtimes and tickets.