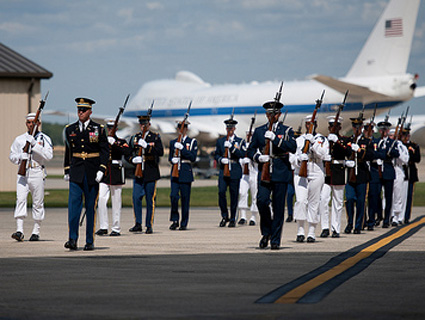 A US honor guard accompanies the remains of the four Americans slain in Benghazi on 9/11/2012.<a href="http://www.flickr.com/photos/usairforce/8009480292/sizes/m/in/photostream/" target="_blank">Flickr/US Air Force</a>

In the weeks since an attack on the US consulate in Benghazi, Libya, killed four Americans, including US Ambassador J. Christopher Stevens, the explanation for what happened has shifted. Initially, the Obama administration said the incident was a spontaneous protest reacting to an anti-Muslim video to referring to the incident as preplanned. On October 2, however, the Daily Beast‘s Eli Lake reported on a letter from Republicans on the House Committee on Oversight and Government Reform that claimed the US consulate had been bombed twice prior to the September 11 attack, and that US officials had requested more security but had been denied. Here are a few questions debate moderators should consider asking the president as he faces off with Republican candidate Mitt Romney in the first 2012 presidential debate in Denver on Wednesday.

1. Did US officials in Benghazi request increased security prior to the September 11 attack on the consulate, as Reps. Darrell Issa (R-Calif) and Mike Chaffetz (R-Utah) allege in their letter to Secretary of State Hillary Clinton? If so, was it refused and why?

2. Why did your administration initially believe the attack had been spontaneous rather than pre-planned?

3. Your administration has applied the 2001 Authorization to Use Military Force to justify strikes against groups affiliated with Al Qaeda that did not exist on 9/11. Does the AUMF and its “reaffirmation” in the 2011 National Defense Authorization Act apply to Al Qaeda in the Islamic Maghreb, or any of the militant groups operating in Libya? If so, does this mean we are again at war in Libya?

5. If the perpetrators of the Benghazi attack are captured during your presidency, either by Libyan or US forces, will they be tried in federal court in the United States?

I wouldn’t be surprised if Libya comes up during the debates. But given the serious issues involved, the moderators should ask substantive questions rather than relying on unverifiable nonsense about “projecting weakness.”

Update: Yes, I understand that the first debate is meant to be focused on domestic policy. However, the moderator, PBS Newshour’s Jim Lehrer, stated in September that the topics were “Subject to possible changes because of news developments.”