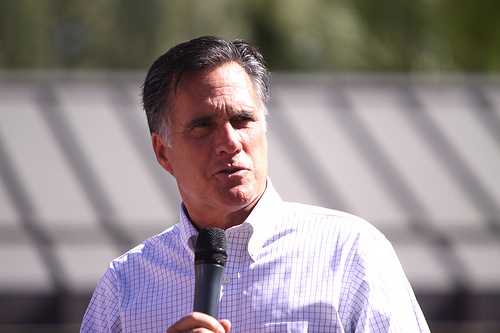 On Friday, Mitt Romney will hold one of the final rallies of his 2012 presidential campaign at Screen Machine Industries, a heavy machinery manufacturer in central Ohio. The company also happens to be the recipient of nearly $220,000 in federal stimulus funds.

Romney and his Republican allies have blasted the president’s stimulus program on the campaign trail and in TV ads. Romney says the stimulus hasn’t created jobs, quipping that “the only thing President Obama’s stimulus has produced is a series of broken promises.” The powerful nonprofit group Crossroads GPS, cofounded by Karl Rove, calls the stimulus “wasteful”; another conservative nonprofit, the Koch-backed Americans for Prosperity, said in one ad that the stimulus “failed to save and create jobs.” (Economists say that, in fact, the stimulus created or preserved up to 3.3 million jobs.)

Screen Machine’s president, Steve Cohen, is no stranger to the Romney campaign. He hosted a Romney rally at his company in July, and spoke at the Republican National Convention the next month. “We need a Romney administration,” he said then, “to ensure our country’s competitiveness and give our companies the opportunity to expand and hire again.” He, along with two other speakers at the RNC’s “We Built It”-themed bash, received big chunks of government money to grow or maintain their businesses.

Screen Machine Industries received its stimulus money via four federal contracts awarded through the Department of Veterans Affairs in the fall of 2009. Cohen told the Associated Press in September 2011 that it would “irresponsible for an American manufacturer not to go after their fair share.” He added, “The question is whether it was a wise investment. That’s for someone else to answer.”

This isn’t the first time Romney held a campaign event at a stimulus-backed business. In August, Romney held a rally at the Watson Truck and Supply company in New Mexico, which received $400,000 in stimulus funds. And for an economic speech Romney gave last week in Iowa, Romney’s campaign chose a construction company that’d received a $1.25 million Small Business Administration loan as part of the stimulus.