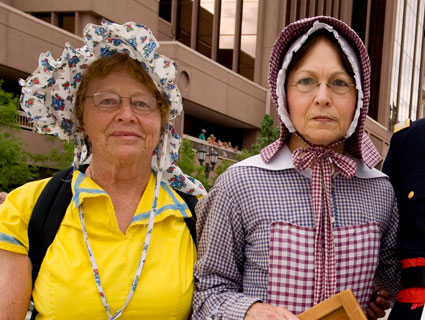 Participants in a Days of '47 Pioneer Day Parade, which honors the settling of Utah by the Mormon pioneers.Brian Cahn/ZUMAPress

Though President Obama holds an advantage among female voters, Romney doesn’t seem to have a women problem in the polls. At least not yet. But there’s one group he definitely can’t count on: Mormon feminists.

Romney’s awkward and tone deaf comments on women in Tuesday’s debate did not sit well with this crew, who follow the teachings of Joseph Smith, but are pushing back against the church’s chauvinistic ways.

Aimee Hickman, co-editor of a Mormon feminist magazine, told Reuters she didn’t have a problem with the candidate’s “binders full of women” comments so much as Romney’s response to a question about pay equity. He said, “[O]ne of the reasons I was able to get so many good women to be part of that team was…because I recognized that if you’re going to have women in the workforce that sometimes you need to be more flexible. My chief of staff, for instance, had two kids that were still in school.” Hickman thought his comments reflected the “church’s paternalistic language that casts women ultimately as mothers,” according to Reuters. “The emphasis on them (women) being seen as leaders or them being seen as breadwinners is still really missing from our rhetoric,” she said.

Lisa Butterworth, who runs the blog Feminist Mormon Housewives told Reuters, “I pretty much know every Mormon feminist, and I can’t think of any of them that are going to vote for Romney.”

Hickman’s magazine did a poll of around 100 of its readers this week, and found Obama favored over Romney by 72 to 30.

As Mormon feminists go, so goes the nation? We shall see. My colleague Stephanie Mencimer notes that Romney has never won a majority of women voters in any of his previous election runs.

According to Reuters, one reader wrote into Hickman’s magazine to comment, “I can’t help but feel he is so far removed from my life he can’t begin to imagine how his actions help or hinder it.”