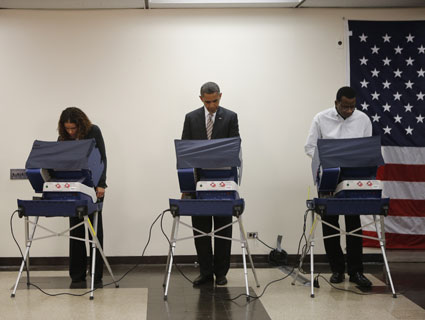 With the 2012 race Sandy-fied—President Barack Obama has canceled campaign events to tend to concentrate on the hurricane and its aftermath—the Obama campaign’s top two strategists, David Axelrod and Jim Messina, held a conference call with reporters Monday morning to  contend there’s no such thing as Mittmentum. As could be expected, the pair said the Obama campaign is better positioned in this final week of the campaign. Axe noted that this is not due “to a mystical faith in a wave [of pro-Obama voters] that’s going to come.” It is attributable, he said, to hard-and-fast data regarding early voting in several states and polls in the swing states.

“You’re going to get spun and spun and spun” by the Romney camp, Axelrod told reporters on the call. He urged the journalists to “focus on the data.”

Messina pointed to the lead item in Politico‘s “Playbook” today, which outlined why each campaign believes it is winning. The Romney gang focused on intangibles, including the possibility of lousy jobs numbers being released this Friday: “We’re focused, but we’re loose, unlike our friends in Chicago.” The Obama team was fixated on statistical indicators: “The early vote numbers make clear that the right combination of diversity, female voters and young voters are showing up. In Iowa and Nevada, we’re racking up 2-1 margins… We’re cutting their absentee margin in Florida, with big registration and early-vote numbers in North Carolina… Now they face a superior organization, which makes all the difference in a close election.”

And that’s sort of how the call went, with Messina citing metrics and data. “We’re leading in every battleground state.” he stressed. “We’re in the close race we’ve always prepared for.” He cited two recent polls showing Obama with a lead in Virginia. Axelrod noted that the campaign’s organizational endeavors have propelled “sporadic voters” to the polls for early voting. This campaign, he said, doesn’t concentrate on registered or likely voters; “we pay more attention to actual voters.”

The campaign’s top duo noted that Obama has led in 14 of the last 16 polls in Ohio (Romney and Obama tied in two) and that early-voting in Florida  has essentially erased the Republican’s advantage in mail-in ballots there. Again and again, they contended that Romney is struggling with the electoral map and that his campaign has repeatedly made claims that did not pan out: we’re surging in Michigan, Pennsylvania is tightening. Obama still has a double-digit lead among women voters, Axelrod said.

At this point in the campaign, the Obama strategists are sticking with what’s always worked for them: the math. During the 2008 primary campaign, they were obsessed with the delegate count and, as Hillary Clinton fought on, insisted continuously that the numbers favored them. They were right. Now, they are asserting once again that the fundamental calculations are on their side—and using the data to counter the Romney campaign’s claims of inevitability.

Reality-based spin does have its benefits. But with a hurricane slamming into the east coast and the race still tight (and within the margin of error in many critical states), the math could change by—or on—Election Day. “We like where we are,” Axelrod said. Maybe he does, but he also told reporters, “In eight days, we’ll know who was bluffing.” That was one assertion that could not be denied.

UPDATE: The Obama campaign has put out a memo outlining much of its eight–days-out case. You can read it here.