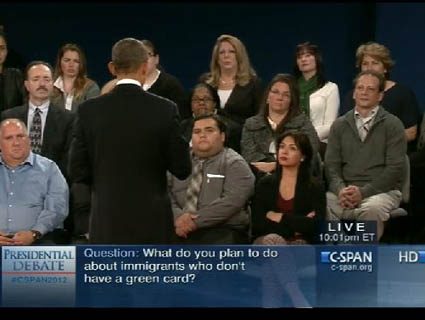 Barack Obama’s record numbers of deportations have been drowned out by Republican accusations of amnesty. Nevertheless, Obama has still deported more than a million unauthorized immigrants. During Tuesday night’s debate, the president offered a very misleading characterization of the undocumented immigrants who have been subject to deportation during his administration.

Here is what Obama said:

What I’ve also said is if we’re going to go after folks who are here illegally, we should do it smartly and go after folks who are criminals, gang bangers, people who are hurting the community, not after students, not after folks who are here just because they’re trying to figure out how to feed their families. And that’s what we’ve done. And what I’ve also said is for young people who come here, brought here often times by their parents. Had gone to school here, pledged allegiance to the flag. Think of this as their country. Understand themselves as Americans in every way except having papers. And we should make sure that we give them a pathway to citizenship.

The truth is that the vast majority of undocumented immigrants who have been deported during Obama’s tenure do not have violent criminal records. Julianne Hing at Colorlines breaks it down, looking at the most recent numbers:

In preliminary data for the January-March 2012 quarter collected by the Transactional Records Access Clearinghouse, for example, just 14 percent of those deported had any criminal record. (Immigration violations are typically considered civil violations, and do not constitute a criminal offense.) But, a closer look at the data shows that just 4 percent of those deported had a so-called “aggravated felon” on their record, an immigration court-specific designation of crimes that can include crimes as serious as rape and murder, but has also been expanded to include violations like theft or non-violent drug offenses.

This is reflected in earlier numbers, as well: Most of those deported don’t have criminal records, and of those who do, few involve violent offenses. It’s true that sometimes minor offenses can be used to target people who are actually suspected of more serious crimes. The reality, though, is that there just aren’t more than a million undocumented “gang bangers” in the United States, and had Romney used similar phrasing to describe undocumented immigrants, the left probably wouldn’t forgive him for it. But Obama gets away with statements like this—perhaps because Romney is so dodgy on immigration that he makes Obama look good by comparison.