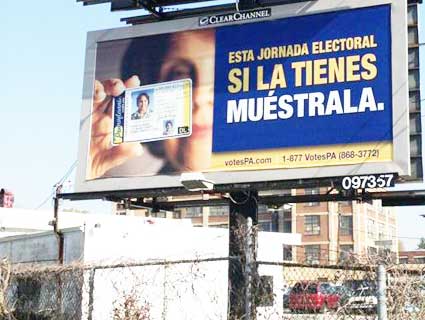 Early this month, a federal judge partially overturned Pennsylvania’s voter ID law, ruling that the state couldn’t require voters to show photo identification at the polls until after the 2012 election. But the ruling has not stopped the state from running ads suggesting otherwise—ads that have disproportionately targeted urban and minority communities that tend to vote for Democrats.

In English, the billboard pictured above reads: “This election, if you’ve got it, show it.” It is one of 58 billboards erected by Pennsylvania’s Republican-led Department of State, mostly in Democratic-leaning Philadelphia and Pittsburgh. Though Latinos make up only 6 percent of the state’s population, about 20 percent of the billboards are in Spanish. Similar Spanish-language ads appear on public buses.

“The ad is really confusing and misleading,” says Marian Schneider, the attorney with the Advancement Project who on October 2 convinced a judge to delay the state’s voter ID law. At the same time, she failed to win an injunction against advertisements publicizing the law, but Schneider recently submitted a new brief asking the court to get involved. She believes the new ads “blur the message” and may dissuade people from voting if they do not have ID.

Billboards in Spanish saying, “If you want to vote, show it,” stayed up well after a court ruled that no ID was needed to vote.

Ron Ruman, a spokesman for the Pennsylvania’s Department of State, denies that the advertisements are misleading. “In the primary all voters were asked for ID, and they will be again in November,” he says, though he acknowledges that people will be allowed to cast regular ballots—ID or no ID. He explained that the department targeted urban locations to get the most bang for the buck, and because “there might be a larger number of people there who might not have a driver’s license.”

Before the court overturned Pennsylvania’s voter ID law, the state had already publicized it with TV ads, thousands of mailers, and numerous billboards and bus advertisements. In the weeks since, the state has taken down some of those ads. But one Spanish-language billboard saying, “If you want to vote, show it,” remained up for many days. And the state has not sent out mailers to clarify the altered circumstances. Voting-rights advocates accuse state elections officials of sowing more confusion with the new billboards.

“What our groups are concerned about is that the billboards are not sending voters the message that the ID is not needed for this election,” says Marcia Johnson-Blanco, codirector of the Voting Rights Project. Her group is fighting back with its own ads, which say that people without IDs can still vote this year.