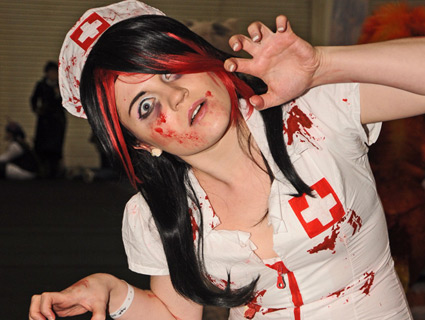 In late April, film icon Molly Ringwald held an “Ask Me Anything” on Reddit. When asked how she has how she had managed to maintain (and, in the opinion of the curious Redditor, improve) her physical appearance as she approaches middle-age, Ringwald responded: “I drink the blood of Kristen Stewart.”

That was a playful joke. Now, have some science:

Experiments on mice have shown that it is possible to rejuvenate the brains of old animals by injecting them with blood from the young. [Saul Villeda], who led the work, found that blood from young mice reversed some of the effects of ageing in the older mice…”Do I think that giving young blood could have an effect on a human? I’m thinking more and more that it might,” said Villeda.

And just like that, real life became a horror movie.

The Guardian reports that Villeda (a 2012 NIH Early Independence Award winner and University of California San Francisco faculty fellow) and his team “connected the circulatory systems of an old and young mouse so that their blood could mingle.” (For another example of attempts at age-rejuvenating blood-mingling, click here.)

But to get serious for a moment, Villeda’s research does show promise for efforts to combat declining brain function and Alzheimer’s disease, as new blood may boost learning and memory capacity in older patients. “What I am thinking is if we can address it earlier, when our body still has the control to prevent this from happening, then we might not have to cure Alzheimer’s, we might just be able to stop it,” Villeda said at the Society for Neuroscience conference in New Orleans earlier this week. Whereas infusion of “old” blood runs the risk of damaging a patient’s brain and vital organs (something to do with the sheer quantity of inflammatory proteins in the plasma), younger blood might, as it seems to have done with mice, help develop new synapses in the brain and revitalize tissue in human subjects. Of course, a far greater amount of research is still necessary before greenlighting this as actual therapy.

The idea sounds macabre, perhaps hilariously so. But don’t let the echoes of Hungarian “Blood Countess” Elizabeth Báthory make you forget that, if this discovery pans out, there could be major medical advances down the road.