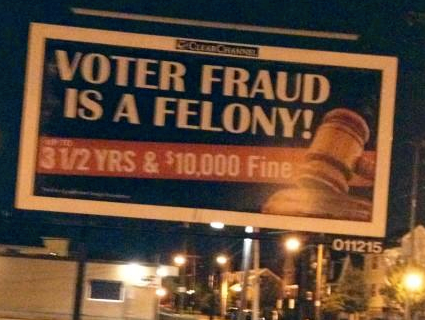 In Ohio, possibly the decisive swing state in this year’s presidential race, 10 billboard ads around Cleveland warn in big block letters and exclamation points that voter fraud is a felony punishable by up to three and a half years in jail and a $10,000 fine.

That might seem like an odd way to spend election-year advertising money, given that in-person voter fraud is less common than UFO sightings. Yet evidence suggests that the creators of the billboards, who identify themselves only as a “private family foundation,” care less about voter fraud per se than scaring away certain voters from the polls.

In 2008, nearly 70 percent of voters in the county that includes Cleveland cast ballots for Barack Obama. While that on its own might suggest a partisan motivation behind the billboards, a closer examination of their locations indicates something worse: a calculated effort to target Democratic-leaning racial and ethnic minorities.

In this map of Cleveland, created by Eric Fischer using 2010 census data, each dot represents 25 residents. Red dots are Caucasians, blue dots are African Americans, orange dots are Hispanics, green dots are Asians, and yellow dots are members of other racial and ethnic groups. I’ve added stars to indicate the locations of the billboards. As you can see, all of the stars are in areas that are either mostly black, or, in the case of the inset, significantly black, Asian, and Hispanic: 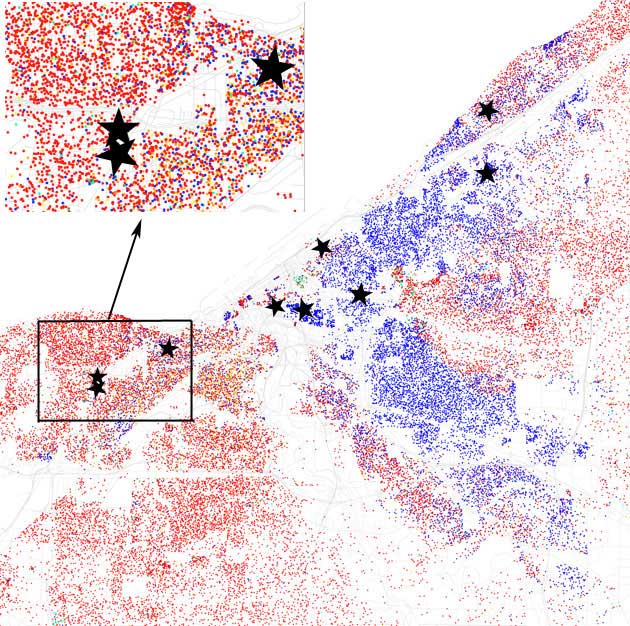 Location of “VOTER FRAUD IS A FELONY!” billboards in Cleveland Eric Fischer/Josh Harkinson

“When you have the words ‘felony,’ ‘voter,’ and ‘fine’ all the the same message, and by placing it where it is, the only message that you are intending to send is that this is a threat to you if you vote,” Cleveland Councilwoman Phyllis Cleveland told the Plain Dealer (see video below). “It’s just a blatant attempt to keep people in this community, particularly black people and poor people, from voting.”