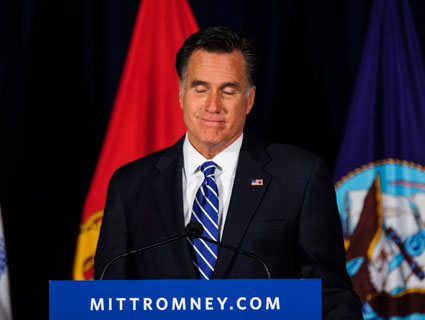 Looks like Mitt Romney’s “47 percent” remarks—in which he said that supporters of the president didn’t pay income tax and felt “entitled” to such luxuries as food and health care—will not be fading into obscurity anytime soon. A recent Obama campaign ad capitalizes on the comments, which Romney made in a fundraiser caught on video and released two weeks ago by Mother Jones. Polls show that Americans aren’t fond of Romney’s sentiments. That has translated into a pretty stark shift in the Republican challenger’s election hopes.

Now, the Washington Post writes that Romney’s comments are “taking a toll” more than other gaffes he’s committed, like saying he likes “being able to fire people who provide services to me” or knows what it’s like to worry about getting a “pink slip,” or like the $10,000 wager he tried to make with Texas Gov. Rick Perry mid-debate:

In the two weeks since a surreptitious video of the remarks surfaced, they have pierced the national consciousness in a way that few blunders do. In the closing stretch of the presidential campaign, the moment has become a defining element of Romney’s candidacy.

Why the sticking power? Because it hits people on a personal level. Republican strategist Alex Castellanos told the Post, “You inform with reason, and you persuade with emotion. [Democrats have] made the rational case that Romney’s policies would hurt the middle class, and this is the emotional counterpart.”

Also, this was no gaffe in the usual sense. Democratic strategist Robert Shrum told the Post many voters have likely concluded: “Wow, that really is the real Romney.”

Of course, the number 47 is going to loom large in the debates. Romney’s apparently been rehearsing some “100 percent” lines. But really, it’s not the kind of comment you can wiggle out of. Said one Romney adviser to the Post: “Trying to explain it is not helpful.”