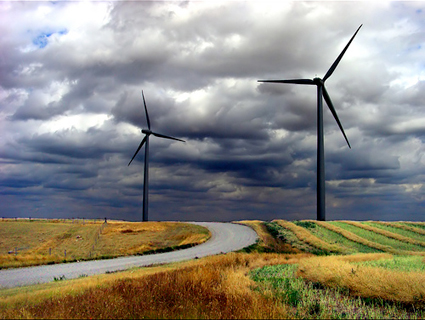 Big storms always raise the spectre of damage to nuclear reactors and other important energy infrastructure. But with wind speeds predicted to gust up to 90 mph today, how are the East Coast’s wind turbines holding up to Hurricane Sandy?

“Wind turbines are designed specifically to harness the wind, but they are also designed to withstand it,” Ellen Carey of the American Wind Energy Association said in an email. Most turbines are designed to stand up to winds up to 135 mph, she said, well beyond what’s expected from this storm. And there are a host of techniques turbines operators can make use of to protect the infrastructure, starting with rotating the blades laterally so that wind slips through them.

Matt Tulis of E.On Energy said a wind farm the company operates in Munnsville, NY, will stay open through storm, barring any mandatory evacuations for workers there.

“They’re prepared for whatever Mother Nature might blow in,” he said. “We look for windy spots. So on a certain level, the more wind the better.”