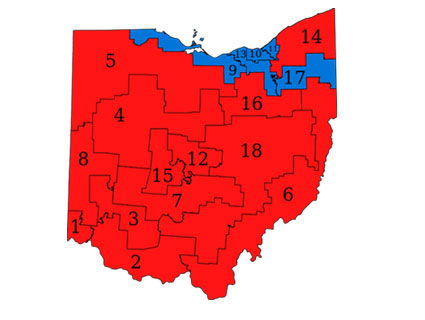 In November 2010, I reported that GOP control of all elements of state government in key swing states—including but not limited to Wisconsin, Michigan, Ohio, Indiana, and Pennsylvania—could ensure a “Republican decade” in control of the House of Representatives. The Democrats’ massive 2010 losses couldn’t have come at a worse time for the party. Because the census was taken in 2010, GOP control of state legislatures and governors mansions around the country gave Republicans the power to draw congressional district lines largely as they chose. They seized that chance, aggressively gerrymandering so as to protect Republican incumbents and endanger any remaining Democrats. The Dems would have done the same thing, of course, had they won control of these crucial states in 2010. But they didn’t.

On Tuesday, the GOP cartographers’ hard work paid off. Despite sweeping wins for Democrats in US Senate races and a broad Electoral College victory for President Barack Obama, it was clear early in the night that Republicans would hold on to the House. As Slate‘s Dave Weigel noted, “ridiculous gerrymanders saved the House Republican majority.” In many states the president won convincingly, Democrats elected a minority of the House delegation. Here are the numbers for states that Obama won or came close and where Republicans drew the congressional map:

It goes to show that when you get to choose the ground on which electoral battles are fought, you’re very likely to win them.