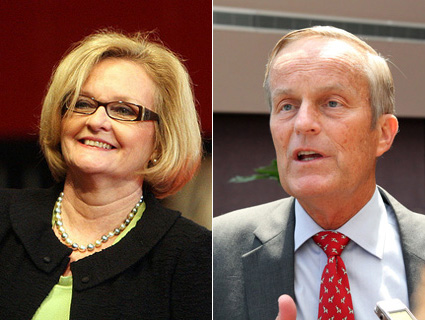 Missouri Democrat Claire McCaskill engineered one of the most stunning reversals of fortune in the 2012 election cycle, defeating Republican Rep. Todd Akin to claim another six-year term in the US Senate. At her campaign’s outset in the summer of 2011, McCaskill was largely seen as the weakest Democratic senator on the ballot anywhere in the country. But ultimately it was McCaskill’s gritty campaign combined with Akin’s eyebrow-raising comments about rape that sealed her victory on Tuesday and denied Republicans a must-win seat if they hoped to reclaim the Senate majority. In an interview with a local TV station in mid-August, Akin claimed that if the rape of a woman is “a legitimate rape, the female body has ways to try to shut that whole thing down.”

Akin’s “legitimate rape” comment ignited a political firestorm, angered women everywhere, and flipped Missouri’s US Senate race on its head. Akin later said he “misspoke,” but the damage was done. Powerful Republican groups like the National Republican Senatorial Committee, Rove’s American Crossroads super-PAC, its affiliate Crossroads GPS, and other outside groups pulled their money out of Missouri. So damaging were his comments that a chorus of Republicans demanded Akin drop out of the race. Rove even joked about Akin’s murder at the Republican National Convention in August.

Akin stood firm. “The people of Missouri chose me to be their candidate,” he told ABC in late August. “And I don’t believe it’s right for party bosses to decide to override those voters.”

But Akin, like fellow rape-gaffe Republican Richard Mourdock in Indiana, never recovered from his “legitimate rape” comment. Despite regaining some of his political and financial support, he trailed McCaskill by 6 percentage points heading into Tuesday’s election in RealClearPolitics’ polling average.

McCaskill’s win, like Sen. Sherrod Brown’s in Ohio, shows that outside money isn’t so useful when it supports a weak candidate. McCaskill faced tens of millions in attacks from super-PACs and dark money groups—to no avail.

The Missouri Senate race marks yet another disappointment for Republicans. They were supposed to send McCaskill packing. But they couldn’t muster the candidate to get the job done.