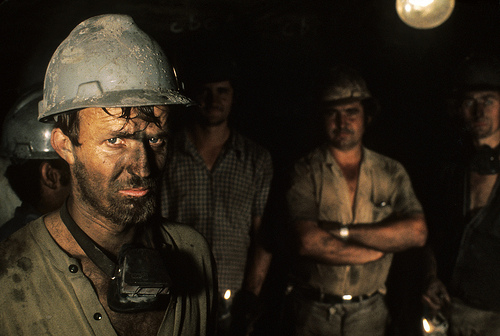 Throughout the presidential campaign, Republicans repeatedly accused the Obama administration of waging a “war on coal.” This despite the fact that the number of coal jobs is actually higher now than it was when President Obama took office, and that many of the reasons the industry has lost jobs in the past year have nothing to do with Obama—like the lower demand for coal because of cheap natural gas or declining quality in reserves.

Now that Obama won, at least one mining executive is aiming to make the “war on coal” real by laying off a bunch of workers. In Carbon County, Utah (yes, that’s really its name), UtahAmerican Energy Inc. announced on Thursday that it has laid off 102 employees in response to Obama’s reelection. It is a subsidiary of Murray Energy Corp., which is, as you may recall, the same company that told Ohio miners that they had to attend a Romney rally in August and that reportedly threatened employees’ jobs if they didn’t support the company’s conservative-aligned political action committee.

The Deseret News reported on the layoffs, citing a statement from the company:

In its statement, UtahAmerican Energy blames the Obama administration for instituting policies that will close down “204 American coal-fired power plants by 2014” and for drastically reducing the market for coal.

“There is nowhere to sell our coal, and when we can, the market prices are far lower,” the statement said. “Without markets, there can be no coal mines and no coal jobs.”

Murray Energy also laid off 54 miners that worked for its American Coal subsidiary in southern Illinois on Wednesday. A Reddit poster says that he was among the workers laid off at one of those mines (he doesn’t mention which). He posted a link to a press release that he says the company distributed to the laid off workers, as well as this statement:

I worked at a coal mine that decided today to layoff over 40 employees and the only reason that was given was that “America has betrayed coal miners” by re-electing President Obama. Despite the fact that nothing has changed in the two days since the election they decide to lay off employees. I’ve seen how corrupt the company can be over the years and am fairly certain the layoffs are just a way to make the President look bad.

The Washington Post reported today on the layoffs, which came directly from CEO Robert Murray, who read a prayer to staffers on the day after the election that said, “Lord, please forgive me and anyone with me in Murray Energy Corp. for the decisions that we are now forced to make to preserve the very existence of any of the enterprises that you have helped us build.” Murray has been very clear about his political views. He doesn’t like Obama. It’s hard not to see the layoffs as political—especially since others in the coal industry aren’t predicting quite the gloomy outlook that Murray is.

And in an ironic twist, one of the reasons coal demand is down in the US, according to the CEO of another coal company, is because warmer weather means people don’t need to heat their homes as much.