With Egypt aspiring to democracy but still in political tumult, much is at stake for its minority populations, including Coptic Christians. They are estimated to number more than 8 million, making them the country’s largest religious minority group. Increasingly they have become a target for extremists. Since the toppling of Hosni Mubarak, acts of aggression and violence, in addition to long-running discrimination and neglect, have instilled fear in the Coptic community regarding their prospects for a peaceful existence. Says Kerolus Dawood, a 22-year-old survivor of the “All Saints” Coptic Church bombing in Alexandria in January 2011: “One of the worst memories of that day was watching the blood of my family being washed down the sewers.” (See photo 10.)

Many Coptic Christians insist that Egypt—and their rights to live, work, and thrive in it—are worth fighting and even dying for. “We are here, and we are not leaving!” is a common refrain among Copts in response to the spike in religious-based violence against them. “I want to be treated like a normal citizen and not neglected because of my name and my religion,” says Hanna Nabi Ayub, 31, recently widowed due to the violence (photo 11).

But the recent attacks also belie pockets of tolerance and integration, and the fact that the Christian community is diverse and evolving: They are activists, priests, farmers, garbage collectors, and more. How Egypt’s largest minority will fare in the years ahead hinges on important questions about democracy, tolerance, and respect, as well as the pivotal role that religion plays more broadly in Egyptian politics and daily life. 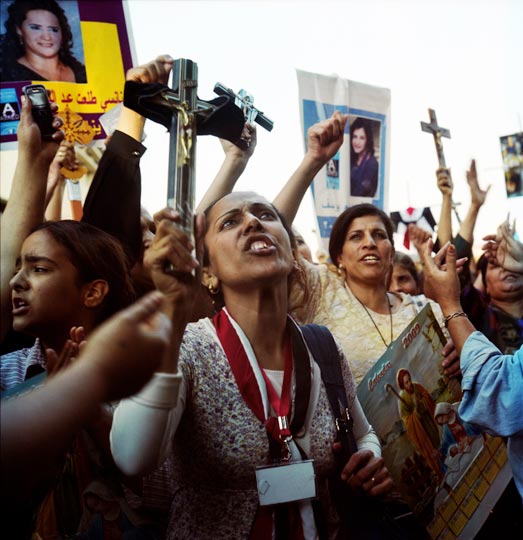 Copts protesting in front of the Maspero TV building in downtown Cairo following the May 7 and 8, 2011, sectarian violence and burning of St. Mina church in the Imbaba neighborhood of Cairo. Twelve died and 232 were injured. 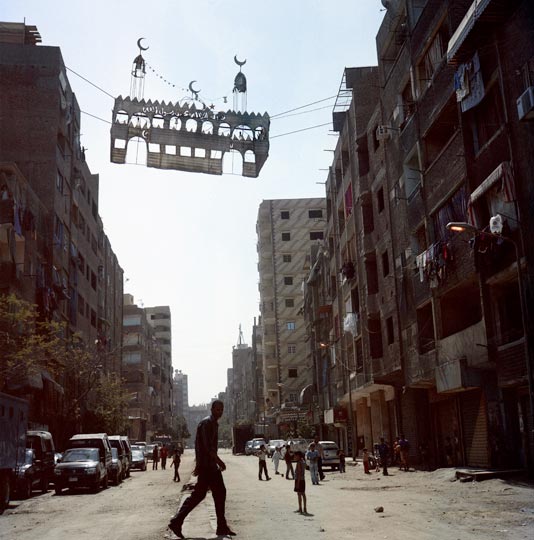 Following sectarian violence in May 2011, Imbaba’s Luxor street is cordoned off by the army, limiting access for local residents. 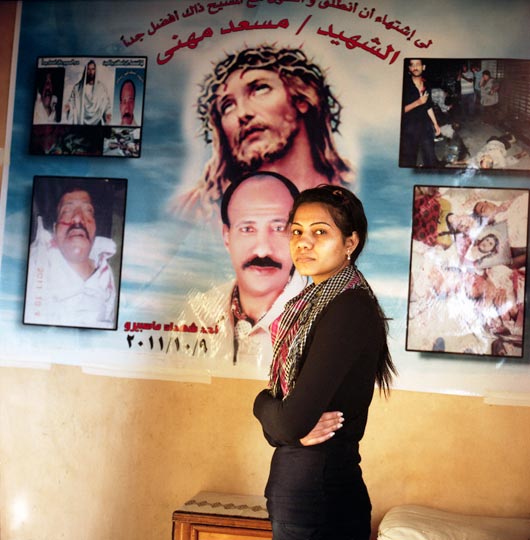 Mariam Musaad stands in front of a picture arrangement showing her father’s body as it was brought to the Coptic Hospital morgue following clashes between civilians and the army near the Maspero TV building on October 9, 2011. The photographs and posters have become a permanent memory installation in Mariam’s living room. 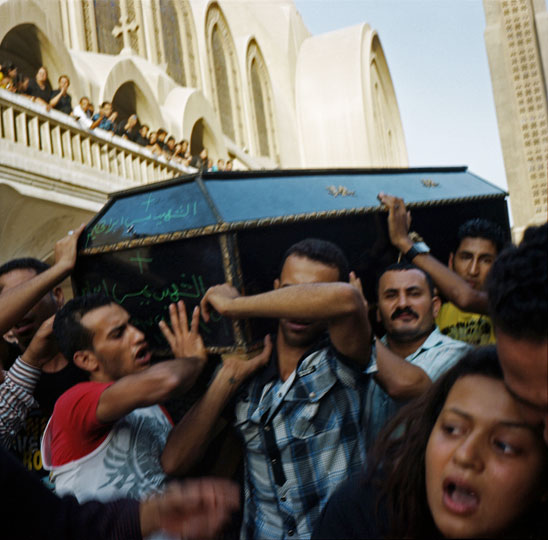 Relatives of victims carry coffins out of the Abbasiya Cathedral to be buried following violence that took place in front of the Maspero TV building on October 9 and 10, 2011. The clashes, which resulted in 28 deaths and left 212 injured, occurred between Copts demonstrating peacefully against an attack on a church in Upper Egypt and the Egyptian Army and security forces. The Copts were violently dispersed by tanks and armored vehicles, as well as random shooting in the crowd. 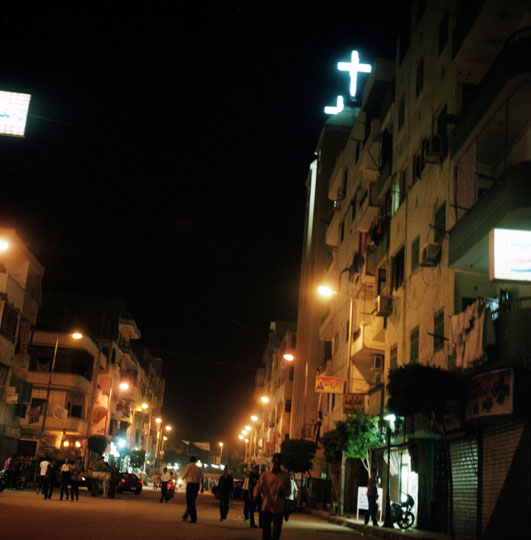 St. Maria Church on 13th of March street in Nag Hammadi. On the Coptic Christmas Eve of January 7, 2010, gunfire from a passing car killed six Coptic young men aged between 15 and 23 who were standing outside Nag Hammadi Cathedral. Three men were arrested and charged with murder; one of the shooters received capital punishment, while the other two were later released. 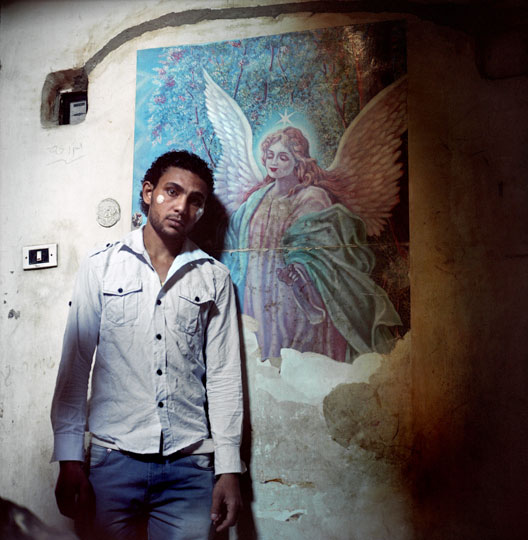 Michael Gamil Said, 22-year-old brother of Karam Adil Said, who was killed in Imbaba on May 8, 2011, during sectarian clashes in front of St. Mina church. 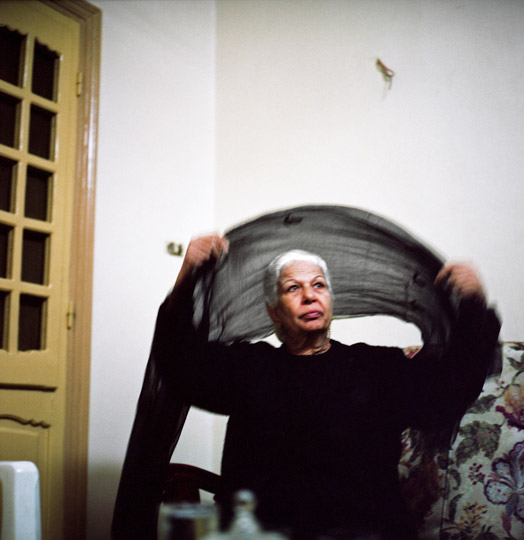 Mary Salema Mikheil, 68-year-old mother of Ayman Sabir Bishay, a 40-year-old advertising agent who was killed in violent clashes in front of the Maspero TV building on October 9, 2011. “The army is supposed to defend us, not kill us!” she said. 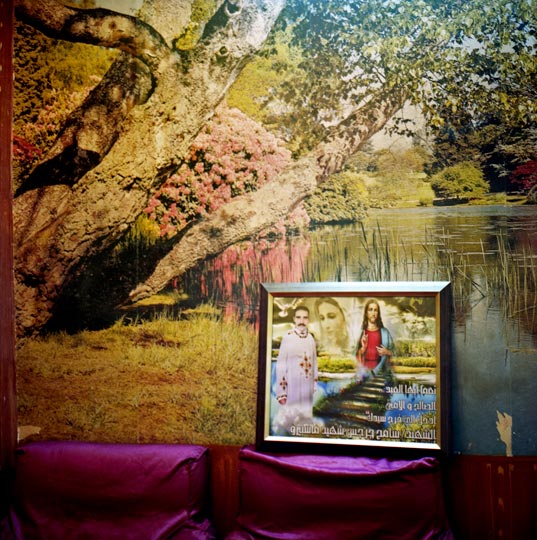 Portrait of Samah Girgiz, a 30-year-old wall painter from Sohag in upper Egypt, who was killed in front of the Maspero TV station on October 9, 2011 during violent clashes with the Egyptian army and security forces. “We will continue our fight. We can’t just disappear—there are 12 million of us!” says Rami Girgiz, Samah’s brother. 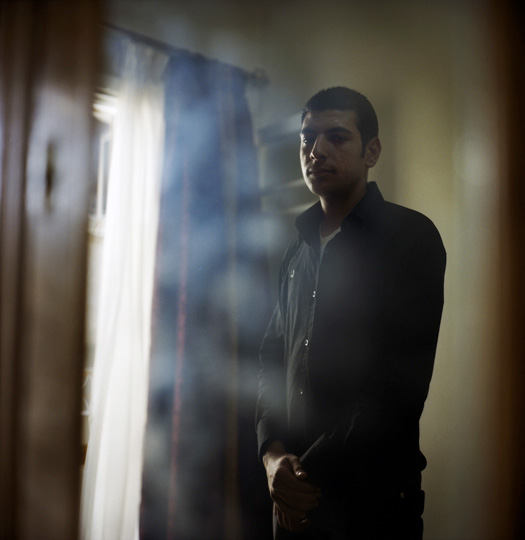 Kerolus Dawood, a 22-year-old survivor of the Alexandria “All Saints” Coptic Church bombing of January 1, 2011. Twenty-four people died in the bombing and 79 were injured. “It was like an earthquake, a big blast. I rushed out to see what happened and saw bodies downstairs, torn off limbs, some people’s clothes were blown off so they covered them with newspapers. My mother was missing, so were both of my sisters and my aunt. I screamed ‘Marina!!’ calling out for my youngest sister, since if something happened to her, I would not be able to live through it. People were in a panic. Everyone was looking for their family members trying to make sure they were not blown up. Blood was everywhere, but no sign of ambulance. Fire fighters came instantly, something very strange as it usually takes a long time for them to show up. They came out of nowhere and starting washing everything with water, blood flowed on the streets and into the gutters. My mother, older sister, and aunt were killed by the blast. I saw my younger sister who was gravely injured, but still alive. I rushed home with her as she needed urgent help. That night I saw my mother’s body in the morgue, she was missing a leg. I recognized her only by her clothes that she was wearing that day. One of the worst memories of that day was watching the blood of my family being washed down the sewers”. 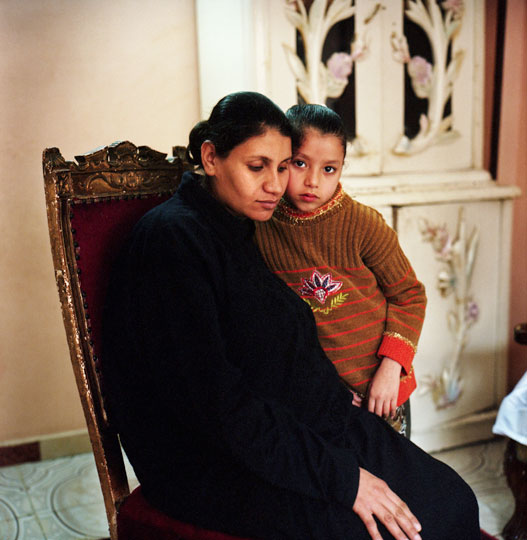 Hanna Nabi Ayub, 31-year-old wife of Feriz Rezik Ayub, the victim of Maspero violence, and her daughter Carolyn. Hanna is eight months pregnant with Feriz Rezik Ayub’s fifth child. “This revolution did not do anything for us. There is still no respect for our rights and there is more freedom for extremists. I want to be treated like a normal citizen and not neglected because of my name and my religion,” she says. 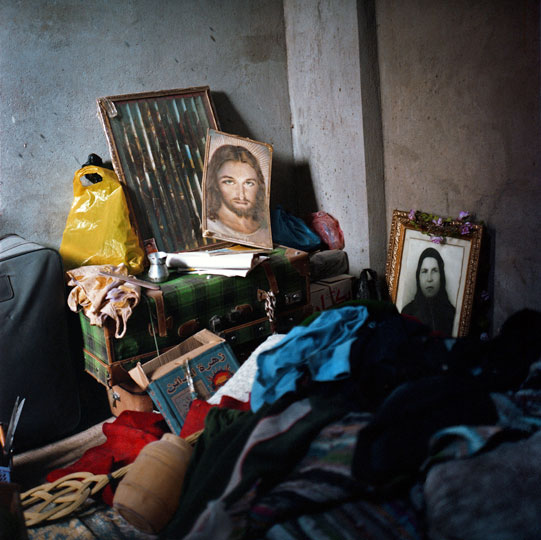 Belongings of El-Saba, the Coptic owner of a plumbing store in Kobry-el-Sharbat village in El-Ameriya, Alexandria who was displaced due to sectarian violence: On January 27, 2012, an angry mob looted and burned Coptic homes and shops in Kobry-el-Sharbat in response to a rumor that a young Coptic man, Mourad Guirgis, had indecent photographs of a Muslim girl on his cellphone. Also, as a result of the rumor, eight Coptic families related to Guirgis were evicted and the remaining 62 families were threatened with deportation. El-Saba did not have any relation to Guirgis’ family, but his home and shop were burned nevertheless. The church is helping El-Saba rebuild his home. 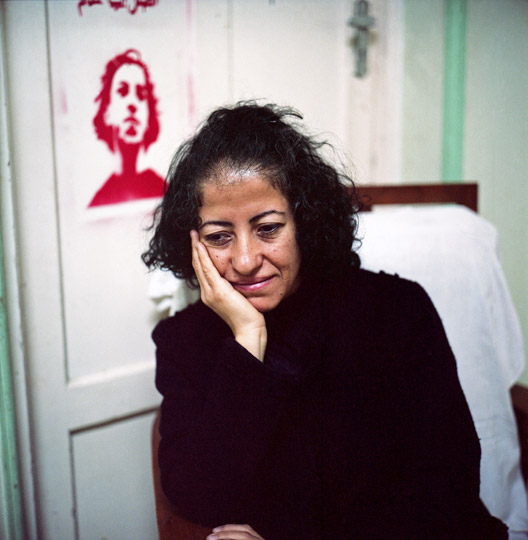 Mary Daniel, 41-year-old sister of Mina Daniel—a young Coptic activist killed in clashes in front of the Maspero TV building on October 9, 2011. Mary has filed for a civil divorce. The Coptic Orthodox Church denies all grounds for divorce except proven adultery. If Mary is granted a civil divorce, she will not be able to remarry in the church. “It’s a man’s society. A man decides what to do—a woman does it. There is a prevailing culture of men. It affects all of us, regardless of our religion,” she says. 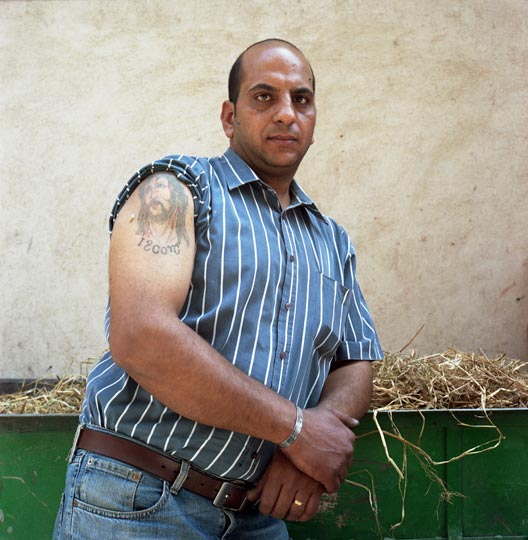 Magdi, a Coptic tattoo artist, outside of the Mar Girgis Church. Copts continue the ancient tradition of tattooing dating back to the Pharaonic era. A very common tattoo design is a small cross on the back of a wrist. The tattoos of crosses mark members of the Coptic community and are made for both children and adults. Other people choose a more expanded version of a Christian tattoo: images of Jesus, the Virgin Mary, or Saint George are some of the more popular designs. 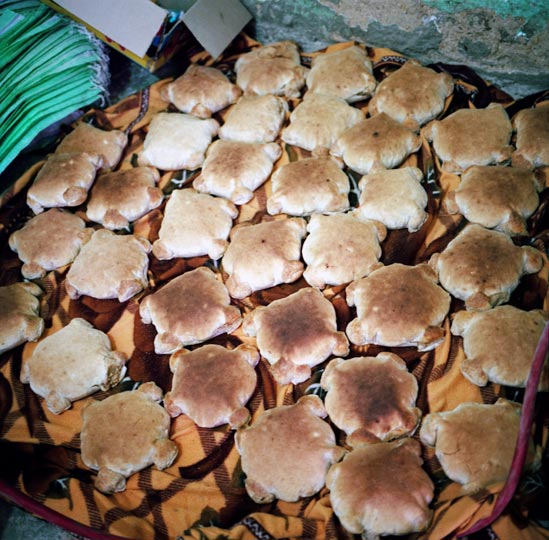 Cross-shaped bread baked in El-Kosheh, a small trading town where one of the bloodiest episodes of sectarian violence took place on January 2, 2000. Following a dispute between a Coptic trader and a Muslim customer, the relationship between the two communities in the town of 35,000 people (70 percent Coptic) soured. As a result, Muslim mobs burned 260 Coptic shops and homes and killed 21 Coptic residents of the village. Some perpetrators of the violence were arrested but later released. The only person convicted in this case was a Muslim man who allegedly shot another Muslim. He was sentenced to 13 years in prison. 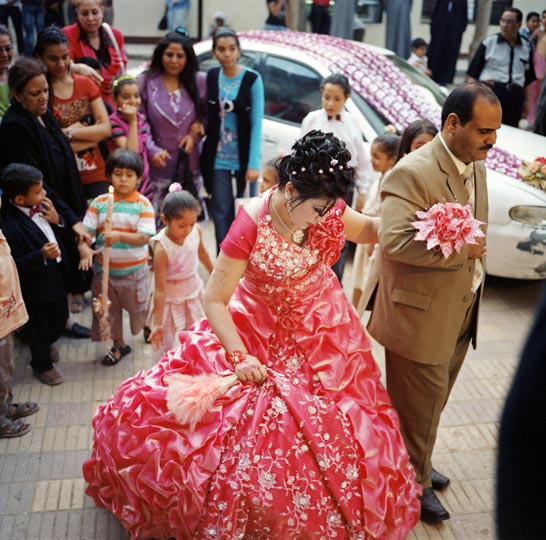 Coptic engagement party in Rahmaniya-Kebly village of Nag Hammadi, Qena. In January 2012, a Muslim mob attacked and burned Coptic homes and shops in Rahmaniya-Kebly in the presence of security forces that, according to local reports, did nothing to prevent the attacks. The dispute began with a property rights issue between a Coptic owner and a Salafi resident of the village, but later progressed into a political argument. Fifty percent of the village population is Coptic. They refused to vote for Salafi-promoted candidates in the local council elections, which sparked clashes with the conservative Salafi groups. 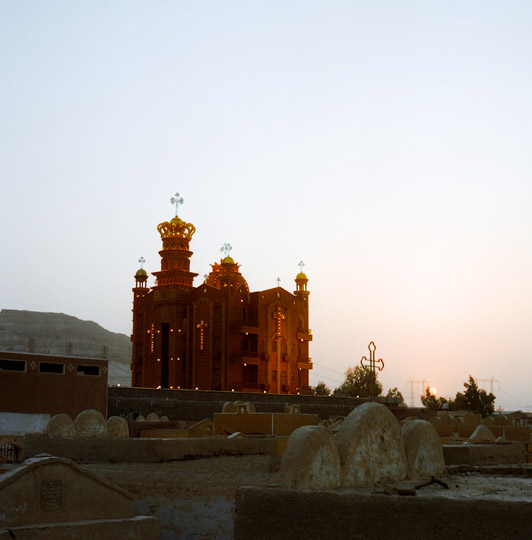 St. George Church by the Coptic cemetery near the Red Monastery in Sohag. 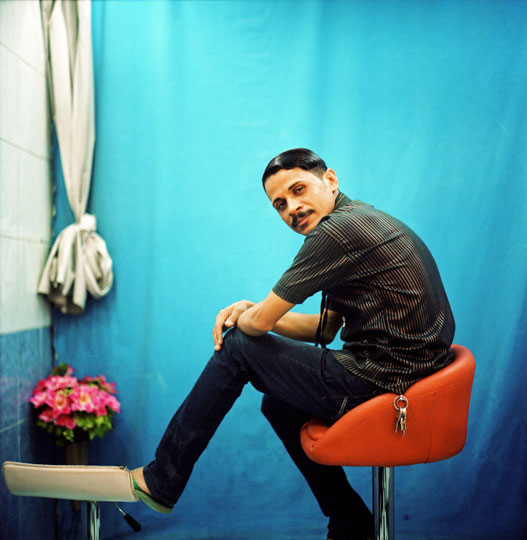 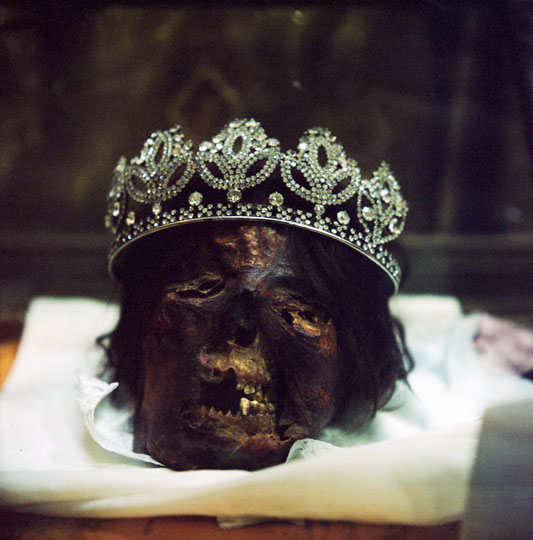 Skull of a Coptic woman, one of the Great Martyrs of Akhmeem. The Monastery of Martyrs in Akhmeem has become a place of pilgrimage for many Copts as they believe visiting the relics of the saints can miraculously cure ailments. These relics are of persecuted Copts dating back to the period of Diocletian and his colleague Maximian, 284 A.D. “The saints are bleeding to this day and the women’s hair is still growing, we even have to trim it. When the pope took one of the heads in his hands, the head glowed. They are blessed!” says the keeper of the monastery. 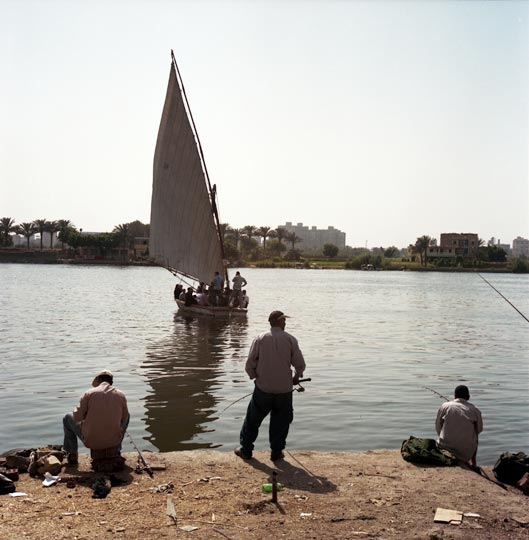 View over the Geziret-Ed-Dahab island, an agricultural oasis on the Nile, in the middle of the megalopolis of Cairo. About 20,000 Muslim and Coptic farmers have been living and working here in peace for many generations. Together, they staged a successful protest in 2001 against the government’s plan to evict the farmers from the island and sell it to private construction firms for development of housing projects. The island is isolated from the mainland and is reachable only by boat. There is no school or hospital on the island. 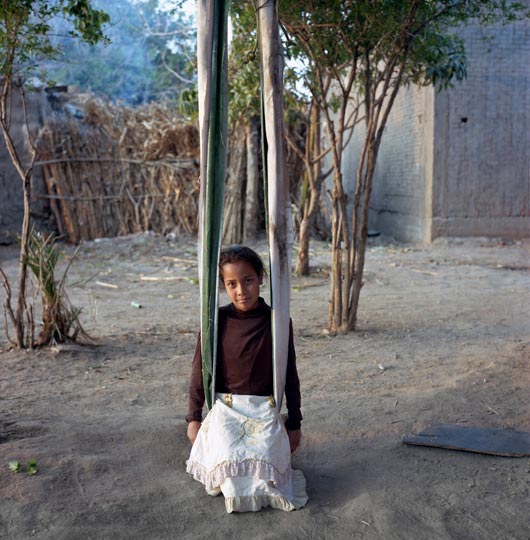 Girl on a swing on Geziret-Ed-Dahab island, an agricultural oasis on the Nile, in the middle of the bustling megalopolis of Cairo.