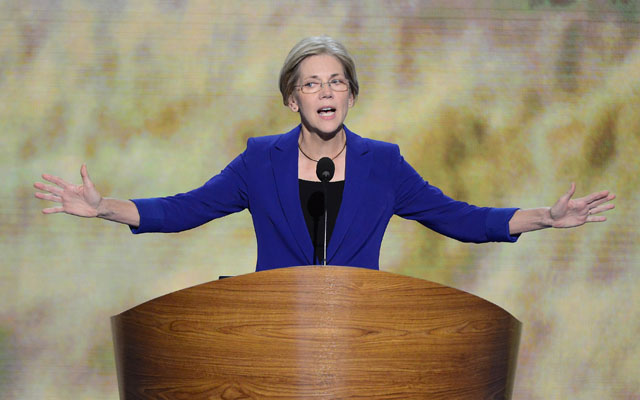 This story has been updated. Click here to read the update.

Not even two weeks have passed since Democrat Elizabeth Warren rode a wave of grassroots support to victory in the US Senate race in Massachusetts, ousting Republican incumbent Scott Brown. Senator-elect Warren has not yet hired her staff. She has not yet moved into her Senate office. But the banking industry is already taking aim at her, scurrying to curb her future clout on Capitol Hill.

Lobbyists and trade groups for Wall Street and other major banking players are pressuring lawmakers to deny Warren a seat on the powerful Senate banking committee. With the impending departures of Sens. Herb Kohl (D-Wis.) and Daniel Akaka (D-Hawaii), Democrats have two spots to fill on the committee before the 113th Congress gavels in next year. Warren has not yet said whether she wants to serve on the committee. But she would be a natural: She’s a bankruptcy law expert, she served as Congress’ lead watchdog overseeing the $700 billion bank bailout from 2008 to 2010, and she conceived of and helped launch the Consumer Financial Protection Bureau (CFPB).

But the big banks are not fans of Warren, and their representatives in Washington have her in their crosshairs. Aides to two senators on the banking committee tell Mother Jones the industry has already moved to block Warren from joining the committee, which is charged with drafting legislation regulating much of the financial industry. “Downtown”—shorthand for Washington’s lobbying corridor—”has been going nuts” to keep her off the committee, another Senate aide says.

Sen. Jack Reed (D-R.I.), a banking committee member, has been angling to get Warren on the committee, “but there are many bank lobbyists pushing to keep her off,” a top Democratic Senate aide told Politico‘s Morning Money tipsheet. But the aide added, “If she really wants banking, it will be very tough politically to keep her off.”

The big banks’ opposition to Warren, a fierce consumer advocate, is no shocker. She supported the Dodd-Frank financial reform law, and she blasted Brown, who did vote for Dodd-Frank, for launching a “guerrilla war” to undermine its implementation. She backs the Volcker Rule, a limit on how much banks can trade with their own money. What may trouble the big banks most is Warren’s call for revisiting the Glass-Steagall Act, which separated riskier investment banks from more staid commercial banks. Reinstating Glass-Steagall would mean breaking up sprawling Wall Street institutions such as JPMorgan Chase, Citigroup, and Bank of America.

Warren has also struck a hard stance on the foreclosure fraud epidemic. During negotiations last year between state attorneys general and bank executives over a foreclosure fraud settlement, Warren suggested the banks cough up $20 billion. The figure angered members of the banking industry, who saw it as far too high. But Warren’s view prevailed—and then some. The banks paid $25 billion in their settlement.

The fight over Warren’s committee assignment renews a Washington battle. Bank lobbyists fought hard to prevent Warren from taking full control of the CFPB when it launched in 2011. And in this skirmish, the banks won. The Obama administration buckled under the weight of Wall Street’s opposition and Republican obstruction and denied Warren the director’s post at the bureau. The White House instead tasked her with getting the bureau up and running, and later nominated Ohio Attorney General Richard Cordray to serve as the bureau’s first director—a nomination she publicly supported.

Consumer advocates and progressives would love to have Warren on the banking committee, which is stacked with bank-friendly Republicans and several Democrats representing states tied to the banking industry. The committee’s chair, Democratic Sen. Tim Johnson, represents South Dakota, home to $2.5 trillion in bank assets and the credit card operations for Citigroup, Wells Fargo, HSBC, and other banks capitalizing on that state’s elimination of interest rate caps. The liberal website Daily Kos recently launched a petition pressuring Democratic leaders in the Senate to give Warren a spot on the banking committee if she wants it.

Warren has “been a champion for the CFPB, but I think even broader than that she has been a champion for family economic security,” says Tom Feltner, director of financial services at the Consumer Federation of America. Sen. Jeff Merkley (D-Ore.), a member of the banking committee, says Warren “would be a great addition” who “will fight to put the middle class first.”

If Warren does ask for and receive a spot on the banking committee, no doubt, she will face a series of fights with her new colleagues. Sen. Richard Shelby of Alabama, the senior Republican on the panel, and other GOPers on the committee loathe Warren’s support for tighter regulation of banks and lenders. They’ve denounced the CFPB as an example of gross government overreach and vowed to block Warren’s nomination to run the bureau when she was under consideration.

It’s up to Senate Majority Leader Harry Reid (D-Nev.) to decide which freshman senators get what assignments. (A spokesman for Reid did not respond to a request for comment.) So Warren’s committee assignments are in his hands. Warren, though, is no ordinary freshman senator, as the early fight over her possible appointment to the banking committee demonstrates. When she does arrive in Washington, a fight will likely follow her wherever she goes.

Update: Last week Sen. Tim Johnson (D-S.D.), chair of the banking committee, publicly said he has a “good working relationship” with Warren and would welcome her onto the committee. “Her expertise and knowledge would be an asset to the committee as we continue working to protect consumers and maintain financial stability,” Johnson said. Click here to return to the top of the story.