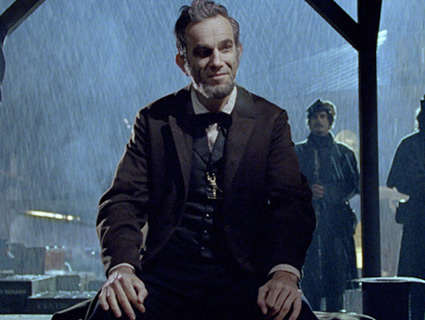 Spoiler alert: He dies at the end.

You can thank me later for spoiling the ending and therefore hopefully zapping your desire to see the movie. If that is the case, I’ve prevented you from blowing 10 dollars on this listless, heaving waste of cinema space.

For a figure so towering, so revered and reviled as Abraham Lincoln, the bar for a great biopic is almost unreachably high. But this particular Lincoln had Pulitzer Prize-winning Tony Kushner signed on as screenwriter. It’s based on (also Pulitzer Prize-winning) historian Doris Kearns Goodwin‘s 2005 book Team of Rivals. Instead of documenting Lincoln’s entire life, the movie zeroes in on a handful of months leading up to the hard-won passage of the 13th Amendment, the Civil War’s end, and the president’s assassination. The large cast includes Daniel Day-Lewis, Tommy Lee Jones, David Strathairn, Sally Fields, Jackie Earle Haley, James Spader, and pretty much every other estimable actor working in Hollywood today and their mothers. Also, Steven Spielberg is directing. (Say what you want about his recent, franchise-ruining output; he’s still the man who helmed this, this, and this.)

The sheer amount of talent invested in Lincoln only serves to underscore and exacerbate the film’s epic fail.

Lincoln is bland and torpid in all the ways the old Rail Splitter was not. Its focus meanders and frustrates, neither fulfilling the demands of a sweeping epic nor examining Lincoln on the micro level in any meaningful way. (His strained family relationships, “team of rivals” administration, and intellectual motivations are all neglected in a narrative structure that is—mindbogglingly—overcommitted yet underambitious.) Matters aren’t at all helped by the fact that there is absolutely no measure by which Thaddeus Stevens (a radical Republican congressman and committed abolitionist played by a first-rate Tommy Lee Jones) does not upstage the eponymous character. In fact, Lincoln comes its closest to achieving rousing fever pitch in scenes that don’t even include the president, but rather Stevens feistily berating gaggles of pro-slavery Democrats. (Had the film been titled The Thaddeus Stevens Show, my tone wouldn’t be so negative right now.)

“Lincoln” wastes an astoundingly talented cast in the service of hollow, patronizing audience-bait.

But the most glaring misstep has to be manner in which Spielberg and Co. handle their depiction of our 16th president: with kid gloves. As great a leader as Lincoln was (the country’s finest, by academic consensus), he still savaged the Constitution, led a ruthless and hellish war on the South, and subverted free press and expression like it was his job. There are, at most, a cumulative three sentences in the film addressing these uncomfortable truths. By portraying Abraham Lincoln as little more than a benevolent and wise old man with an army, the filmmakers do a disservice to his legacy and deny us a far more interesting and nuanced character—one who was accomplished and awe-inspiring, yet profoundly flawed. What we get is the two-and-a-half-hour cinematic equivalent of an incompetent schoolteacher mumbling at you that Lincoln was a moral person and ended slavery because he was a moral person who really wanted to end slavery—”the purest man in America,” as Stevens so eye-rollingly describes him.

In short, Lincoln is a Hallmark Hall of Fame flick with slightly more bayoneting than you’d expect from one.

If you’re searching for a more worthwhile Lincoln interpretation, try this episode of The Twilight Zone (in which he quotes Shakespeare and succinctly meditates on the tragedy of war) or this installment of the fantastic series Drunk History (in which Lincoln is played by Will Ferrell and intensely bros out with Frederick Douglass).

One final note: A lot of critics are going to make jokes comparing Lincoln to last summer’s Abraham Lincoln: Vampire Hunter. They will think they are clever. It will be lame; it will be excruciating.

I don’t endorse this inevitable trend among trolling critics, but here’s my short version of the side-by-side comparison, anyway: Lincoln wastes an astoundingly talented cast in the service of hollow, patronizing audience bait. Abraham Lincoln: Vampire Hunter includes ravenous vampires. If it comes down to one or the other, I’d go with the vampires.

Lincoln gets a wide release on Friday, November 9. The film is rated PG-13 for an intense scene of war violence, some images of carnage and brief strong language. Click here for local showtimes and tickets.