On Wednesday, the Israeli Air Force took out a car carrying Ahmed Said Khalil al-Jabari, head of the military wing (the Al-Qassam Brigades) of Hamas, the Palestinian terror group that governs the Gaza Strip. Shortly after, the Israeli military started going to town on Gaza, again.

And like that, the Israel Defense Forces took to social media to promo the assassination.

The IDF quickly posted a 10-second, black-and-white video of the killing to its official YouTube page. It was titled, “IDF Pinpoint Strike on Ahmed Jabari, Head of Hamas Military Wing,” and vividly shows the moment of impact. By Wednesday night the video had been taken down “because its content violated YouTube’s Terms of Service.” (UPDATE: On Thursday, the video was reposted to YouTube in full.) Here’s a screenshot: 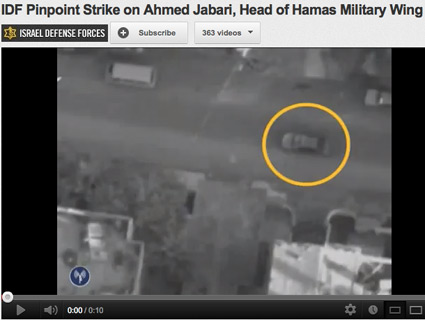 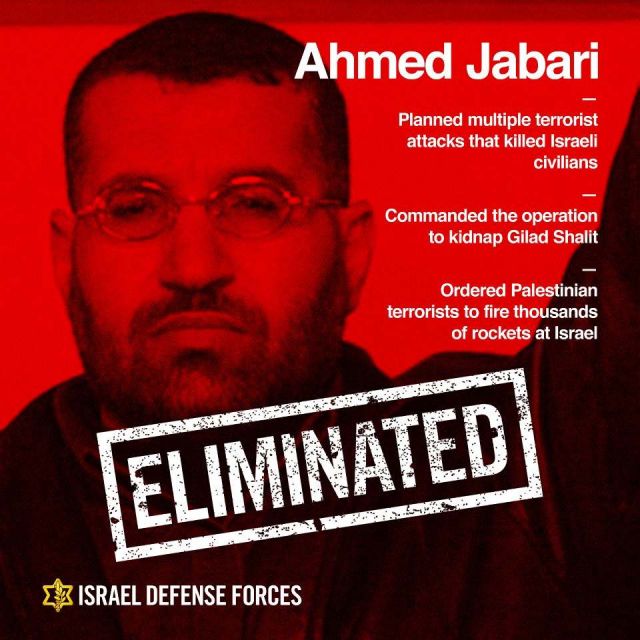 The update also read, “We recommend that no Hamas operatives, whether low level or senior leaders, show their faces above ground in the days ahead.” Via Facebook

And with a message identical to the one on their Facebook update, the Israeli military began smack-talking via Twitter, setting off this feud with the official account of Hamas’ Al-Qassam Brigades: 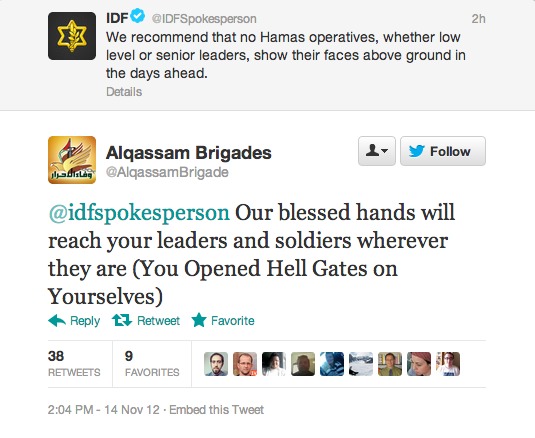 Keep in mind that Twitter feuds are typically what happen between G-Unit and Game, not armies with huge geopolitical stakes attached. H/t Alex Yudelson

There was the obligatory live-blogging, with regular updates on the offensive: 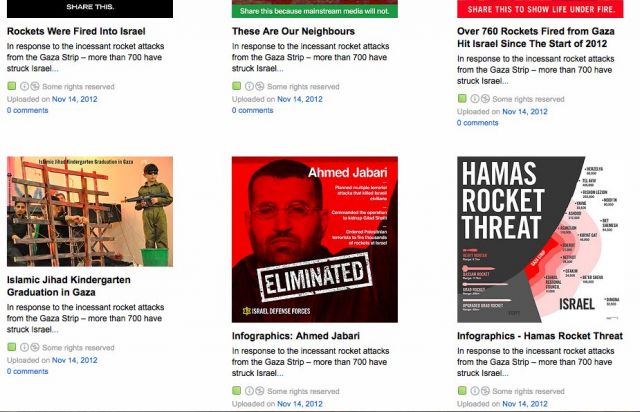 More pages of IDF pics here. It seems the only thing missing was Instagramming the air strike, or possibly hashtagging the assassination (the IDF did, however, hashtag the general military operation with #PillarOfDefense).

“This is a very different way of waging the war of opinion online,” Noah Shachtman at Wired‘s Danger Room wrote. “When an American drone strikes a suspected militant in Afghanistan, that footage is rarely made public — and, if so, only months after the fact. After the raid on Osama bin Laden’s compound, White House and Pentagon aides did start leaking details like mad. But the only live tweets from the operation were from a bystander in Abbottabad who heard the helicopters landing. And the pictures of bin Laden’s corpse were purposely kept from the public.”

The Israeli offensive “Pillar of Defense” (a.k.a. “Pillar of Cloud,” its Bible-themed Hebrew code name), which kicked into high-gear following Jabari’s death, has already seen its fair share of casualties. Reports show that Israeli air, sea, and tank attacks on Gaza targets have resulted in dozens of Palestinians injured, and multiple fatalities—including a woman pregnant with twins and three children, says the local health ministry. Omar Misharawi, the 11-month-old son of BBC Arabic journalist Jihad Misharawi, was killed when shrapnel struck their home in Gaza. At least seven Hamas militants were killed.

Initial reports of Israeli casualties has three dead from rockets launched by Gaza militants that hit an apartment building in the southern town of Kiryat Malakhi.

In response to the attacks, the UN Security Council convened a closed meeting with representatives from the Palestinian Authority (but not Hamas) and the Israeli government. Israel “threatened a wider offensive in the Palestinian enclave to stem rocket salvoes by Hamas militants,” Reuters reports. This is the first instance of Israel pledging to use ground troops since the 2008-2009 Gaza War.