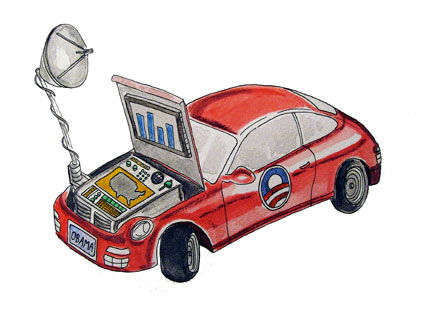 Mitt Romney’s top strategists don’t have to look very far to see where things went terribly wrong. All they have to do is check the bottom line. According to Kantar Media’s post-election tally of 2012 spending, the Romney campaign spent an average of $666 per television spot—$72 more than its Democratic rival.

Post-election, the conservative base has focused much of its ire on Team Romney’s failed voter-turnout tool (code name: Project ORCA). But the gap in per-ad spending is perhaps more illustrative of the technological chasm between the rival campaigns—a gap that Team Obama leveraged into an edge in fundraising, messaging, and, ultimately, the election. It was no accident. Over the last four years, the Obama campaign has sought to turn the art of campaigning into something closer to a science.

A major drawback with TV advertising—for politicos and businesses alike—has always been in the pricing. “It’s not like the stock market where you can just plug it in and you know the rate,” says Carol Davidsen, director of integration and media targeting for the Obama campaign. Local stations can substantially change the price of a time slot even after it has been reserved. So the campaign looked for a way, as best it could, to predict the future.

The solution was a program called Optimizer: A team of software engineers at Obama HQ in Chicago headquarters developed a system that collected reams of data on the pricing of TV ads. An analytics team, operating out of a side room half-jokingly dubbed “The Cave,” then sifted through the data in search of efficiencies.

“Okay, here are the households that watch Spongebob; what else are they watching?”

The results prompted the Obama campaign to seek bargains outside of the usual local newscasts. And thanks to data it had already collected on likely voters, the geeks had a pretty good idea of where to look. For instance, the analytics team discovered that a large number of registered voters who had avoided watching the debates weren’t apathetic after all; they just had young kids and were too busy to tune in. “So then it’s like, ‘Okay, here are the households that watch Spongebob; what else are they watching?'” Davidsen says. The team used the same approach for voters tagged as non-news consumers or who watched fewer than two hours of television per day. “It was kind of like a secret weapon,” Davidsen adds.

An armory might be the better analogy: For all the talk of debates and strategy, of Bain and the 47 percent, President Obama was reelected last Tuesday in no small part thanks to the work of an unprecedented political tech operation. Its edge allowed Chicago to build the most prolific online fundraising machine ever—and spend the cash it raised more effectively. (The campaign hasn’t released its final online fundraising tally, but staffers expect that it will exceed the $500 million brought in four years ago.)

Early in the process, as the Republican primaries were in their last throes, the Obama campaign’s digital division worked with the Democratic firm Blue State Digital to develop a fundraising shortcut called Quick Donate. A simple hack, it gave donors the option of saving their credit card information on the donation website. If people consented, subsequent fundraising pitches—there were dozens each week—would include a one-click donation button for various small-dollar amounts. (Normally, supporters would have to be routed through the website to provide their credit information again.) If the pre-approved donors also signed up for SMS alerts, giving became as easy as sending a text. All told, Quick Donate netted the campaign about $60 million more than it would have raised with email blasts alone.

Using digital analytics, Team Obama was likewise able to squeeze every last cent out of supporters in ways unimaginable only four years ago. In 2008, with the help of a Google alum named Dan Siroker, the campaign had begun using A/B testing—sending variations of an email or a web page to different groups of people to measure the relative effectiveness of each. In the latest election cycle, that ethos extended to pretty much everything the campaign did, from fundraising emails (sent out in 26 varieties and then analyzed for patterns) to the online donation landing page. By turning its donation process into four steps instead of a single long form, the campaign boosted fundraising from its donations page by 15 percent.

Now if an organizer tapped his tablet in Cuyahoga, it had a ripple effect in Chicago.

Over the last decade, as campaigns acquired more and more data—everything from voters’ shopping habits to their caucus attendance record—they ran into a bit of a Babel problem. Their disparate databases were often incompatible, so that an online phone banker, for example, might waste resources by calling a person who’d already told in-person canvassers that he or she had voted early. The solution was a project called Narwhal, managed by Davidsen. Narwhal integrated all of the various data sets—consumer data, voting history, party file, and online profile—so that they could be updated and accessed in real-time. Now if an organizer tapped his tablet in Cuyahoga, it had a ripple effect in Chicago.

The campaign also got better at using its tools to understand and respond what was going on in the field. “The most important part of the data story that doesn’t get told is a phrase that [Team Obama CTO Harper Reed] uses a lot and we sort of stole from [tech entrepreneur] Tim O’Reilly,” says Michael Slaby, the campaign’s director of integration and innovation. “It’s called ‘microlistening.’

Last June, just a few weeks after he had signed on with the campaign following a long stint at the T-shirt retailer Threadless, Reed traveled to Foo Camp, an annual, invitation-only technology conference held in the San Francisco Bay Area. As Reed expounded on the problems the campaign was encountering as it sought to get its mojo back, O’Reilly approached with some advice: “I think the campaign needs to get over targeting,” Reed recalls him saying. “And they need to start thinking about listening.”

One 261-word email plea, titled “I will be outspent,” netted Team Obama $2.4 million in a little more than a day.

Reed took it to heart. When the campaign rolled out Dashboard—a one-stop site for phone-banking, event-planning, and networking—it transformed how volunteers and staff interacted. The new platform allowed OFA to collect feedback from the ground on an enormous scale, and respond accordingly. In short, it made the flow of information bidirectional.

“What it did was it listened, and it trickled up information,” Reed told me. “So like, if you were a volunteer and you knocked on a bunch of doors and you had a particularly bad day, you could say, ‘I’m in a very red area, I’m having a particularly bad day specifically on health care.’ So that trickles up. And so, at HQ, you’re able to say, ‘We need to send this person more information, particularly about health care, to arm them, so it can be less depressing.'”

As Slaby explains, Dashboard also increased the “stickiness” of the campaign’s contacts with supporters. If someone used the platform to, say, join a Veterans for Obama group or sign up to help at their local precinct, they’d hear back from a real person within three days. “After 72 hours, the likelihood that someone’s going to engage drops precipitously,” Slaby says.

It’s not like there weren’t some scary times. After the GOP primaries wound down in May and June, Team Obama’s online registration drive was signing up just a few dozen new voters per day and digital fundraising was floundering—a large part of the reason why the campaign was considering dramatically scaling down its final fundraising marks.

But their fortunes reversed on June 26. That’s the day the campaign blasted out a fundraising email bearing the president’s name and an ominous subject line: “I will be outspent.” The brief, 261-word pitch brought in $2.4 million in a little more than a day—more than double what the campaign had ever raised in a single email push. They never looked back.